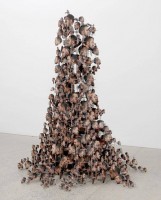 “Until recently I created my photocollages by shooting hundreds of pictures on film, slicing photographic elements out of their original context by hand and sticking them together with adhesive. I was interested in the photograph’s relationship to its subject and how digital technologies might change the way we understand the photographic image. In the installation Thud (2003) obsolete methods of production created an environment that ‘mimicked’ high-tech digital simulation. My illusion was literally paper thin – all surface no depth – evoking notions of memory, loss, and an unnerving sense of mortality.

In 2005 I collaged over one hundred photographs of a male face and created a fleshy sphere that was both carnal and funny. The surface of the work was textured like a pineapple skin where the heads overlapped. Exhibited at the same time, the work double v consisted of two forms created entirely out of arms. Fingers gave the ‘up yours’ sign in one and the ‘peace’ sign in the other and the work slyly referred to images found in popular culture, Eastern mysticism and news media.

In 2006 I began working with a digital camera. Digitalisation changed the way I could think about creating a work. Reduced production costs increased the amount of photographic parts I could produce in order to create even more elaborate three-dimensional collages. In Godfinger 1 & 2 (2007) I used a detail of Michelangelo’s iconic fresco in the Sistine Chapel as starting point. I was interested in the way reproductions become ’unstuck’ from their original. In this work the humble snapshot fell off the wall and bloomed in the gallery space – a technological perversion of biological replication that continued, unstoppable, in the realm of the visual.”