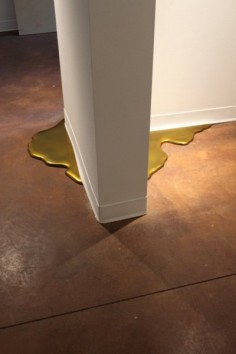 Gold Flood poses questions about systems of value by way of this mysterious metal for which we work, fight, cry, toil, and sacrifice. “By gold all good faith has been banished; by gold our rights are abused; the law itself is influenced by gold, and soon there will be an end of every modest restraint.” – Sextus Propertius
.
.
.
.
.
.
.
source: artforum

In the 1970s, Lynda Benglis notoriously flirted with vulgarity in her slicing response to the machismo of contemporary male artists. Karen Lofgren’s solo debut, the installation Gold Flood, 2009, expands on Benglis’s response to Minimalist sculpture by injecting that aesthetic with a dose of the fantastic and potent ambiguity (as well as historical scholarship in a limited-edition artist’s book) surrounding the most sought-after of substances: gold. Lofgren’s site-specific sculpture (in multiple parts) lines the baseboards along the gallery walls, and though made of wood that is carefully rendered and painted, the pieces here look to be, as the title suggests, flooding the gallery with the scintillating metal. Meaning is multifaceted, but the first thought that comes to mind is that Lofgren’s gilded puddles are easy stand-ins for the recent rise and fall of the wealthy (and the artists they supported), raising the question, Is the gold flood coming or receding?

The simple material presence of Gold Flood changes its context. The space of the gallery itself, the gadgets of climate control, the air vents, and the lighting armature all begin to appear as part of the exhibition. And the piece, in its own way, offers the subtle sleight of institutional critique. The California clique of Light and Spacers made spaces obvious (or dramatically unobvious, if such a thing is possible) with their own tactics, notably in Robert Irwin’s scrim that closed off a few feet of the Pace Gallery for his 1974 installation Soft Wall (recently on view in Los Angeles). But a work like Lofgren’s, though unsubtle in its shimmering presence, is subtle in its gesture of making a viewer aware of the space in a way that ditches some of the voodoo of Light and Space. The veneer of her work isn’t perfect, but it’s pretty close, and just messy enough to clue viewers in that this is a sculpture and not a trick of the eye or mere eye candy, but something a little deeper and more troubling than its shine.
.
.
.
.
.
.
.
source: royaleprojects

Karen Lofgren is a Canada native born and raised on Toronto island. She is an OCAD graduate who continued her education at CalArts in Los Angeles where she now lives and works full time. Her artwork incorporates pop-cultural, punk, and minimal aesthetics with reverence for ritual, material, and process. She is recognized for darkly delving into the collective unconscious through sculpture and installation, as well as a wide variety of mixed media including video, photography, sound, and works on paper. Lofgren’s work taps into cultural anxiety, contemporary ritual, and ancient mythology through objects and environments at life-scale. Referencing recent practices such as feminism and self-actualization as well as mythology, and ancient cultures & symbols, the resulting historical and philosophical content is transformed to reflect and then dissolve the familiar. With a dose of the fantastic, a subtle sleight of institutional critique and charged with potent uncertainty, Lofgren’s practice reveals deep and troubling complexities below the surface.
Karen Lofgren completed her MFA at CalArts in 2000. Recent solo exhibitions include Ritual Landscape at royale projects contemporary art; Trajectory Object c. 2000-2050 with the non-profit founded by Andrea Zittel called High Desert Test Sites; Stabilizers at Armory Center for the Arts; Blood Sister at royale projects: contemporary art, as well as shows at LACE; Pitzer Art Galleries; PØST; and Machine Project. Group exhibitions include Commonwealth & Council; Los Angeles County Museum of Art (LACMA); Human Resources; Bank of America; Carter & Citizen; Vancouver Biennale; and OCAD University. Her projects have received support from the Canada Council for the Arts; Durfee Foundation; the Andy Warhol Foundation for the Visual Arts; The Ranch Projects; and West of Rome Public Art. Lofgren’s work has been reviewed in media such as ArtForum, ARTslanT, The Los Angeles Times, LA Weekly, Daily Serving Toronto and Droste Effect as well as books, catalogues and album covers.
.
.
.
.
.
.
.
source: karenlofgrennet

Karen Lofgren is a Toronto-born and LA-based artist who completed her MFA at CalArts. Recent solo projects include Trajectory Object c. 2000-2050 at High Desert Test Sites; Stabilizers at Armory Center for the Arts; and Blood Sister at Royale Projects Contemporary Art, as well as shows at LACE; Pitzer Art Galleries; PØST; and Machine Project. Past work has been supported by Canada Council for the Arts; the Durfee Foundation; the Ranch Projects; West of Rome Public Art; and the Andy Warhol Foundation for the Visual Arts. She has been featured in Droste Effect, artforum.com critic’s picks, LA Weekly, the Los Angeles Times, as well as books, catalogues, and album covers.