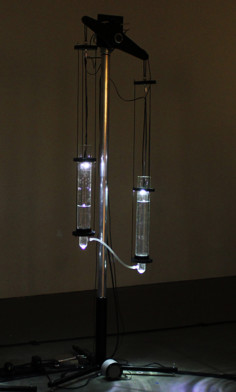 “The sound is much like a glass harmonica playing gentle glissandi… What was intended as sonic art is actually a beautiful new instrument.” The Wire

Tipping Point invites us to consider our relationship with water, and the necessity of balancing how we use the world’s water resources. The installation is created using a delicate combination of glass, water, audio feedback and lighting. Glass vessels filled with water are balanced by mechanics and bespoke computer software, which listens to microphone feedback produced by the acoustic qualities of the vessels themselves. The glasses are arranged in pairs and interconnected, and as one glass fills, the other empties. The quantity of the water inside each glass changes the pitch of the audio feedback and the brightness of the lights inside. When all of the twelve are resonating, a layered, choral texture is created, whereas a solo or duet reveals plaintive rising and falling scales. The “tipping point” is a metaphor employed to talk about balance and the cause and effect of shifting water levels.

Tipping Point forms both a sculptural sound installation and the basis of a live performance in which Kathy Hinde controls all the aspects of the installation live including the speed of the motors, the positions of the mechanical arms, the water levels, and how many glass vessels are resonating. She works with a range of guitar pedals to re-pitch the sounds, accentuate different frequencies, and add reverb to augment the soundscape to create an immersive composition.

Tipping Point is a collaboration with John Rowden at the Scientific Glass Workshop in the School of Physics at the University of Bristol with software designed by Matthew Olden. Tipping Point received an honorary mention for the Prix Ars Electronica Digital Musics and Sound Art Category 2015

“…there is much to be gained from allowing your attention to slip away and be carried off into abstract reflections, held aloft by the delicate, measured interplay of glass, water and electronics.” Total Theatre on Tipping Point at Sonica, Glasgow 2015

A Cryptic commission for Sonica 2014 in association with Cove Park, supported by the PRS for Music Foundation, the Britten-Pears Foundation and The Hinrichsen Foundation.

This blog documents the creative process and development of Tipping Point.

Video of Tipping Point installation at Woodend Barn, Aberdeenshire when exhibited at sound festival in November 2014.

Kathy Hinde’s work grows from a partnership between nature and technology expressed through audio-visual installations and performances that combine sound, sculpture, image and light. Drawing on inspiration from behaviours and phenomena found in the natural world, she creates work that is generative; that evolves; that can be different each time it is experienced.

Kathy frequently works in collaboration with other practitioners and scientists and often actively involves the audience in the creative process. She has created light and sound installations in public spaces, including town high streets and nature reserves.

She has shown work across Europe, Scandinavia, China, Pakistan, USA, Colombia, Brazil and New Zealand. She is a Cryptic associate, since 2015. Kathy received an Honorary Mention at Prix Ars Electronica 2015 for Tipping Point and Piano Migrations was runner up for the Sonic Arts Award 2014 and listed for the Aesthetica Art Prize 2014.

I am a composer and visual artist. Combining these two artforms is at the heart of my practice, and fundamental to my creative process. I compose visual scores to create music by constantly challenging and re-imagining what a visual score could be.

My composition process often employs ‘open scores’ and chance procedures. The resulting work is generative, which evolves and is different each time it is experienced. I compose carefully constructed frameworks from which the precise nature of sonic and visual events are changeable rather than fixed. When composing with open scores, I aim to define uncomplicated rules, from which a complex system of behaviours can emerge; the whole becoming much greater than the sum of its parts.

I create work that combines technology and nature as a reflection on how technology is becoming increasingly embedded in our everyday lives. I love new technology, and I love being in the outside world, watching birds flock, or listening to bats echo-locating.

As nature adapts in response to its environment, my ‘open scores’ shape the behaviour and evolution of the music. When analysed, aspects of naturally evolved behaviours can be represented by tangible, rule-based systems. I am fascinated with this analysis, and how it is applied in artificial intelligence. It is the combination of artificially intelligent systems with human / animal intuition and the instinct to adapt and survive that I find most powerful and inspiring.

Some examples of my work that combine technology and machine systems with behaviours from the natural world are:
(i) A computer vision system that analyses the movement of migrating birds to create piano music.
(ii) A soundscape that emerges from singers ‘echo-locating’ using distance sensors and mini-computers that alter their vocal calls depending on their proximity to each other.
(iii) Online soundmaps that evolve and grow as people upload field recordings. The soundmaps can be played like visual scores.

I frequently work in collaboration with other creative practitioners and professionals from different disciplines, including dance, live art and science. This enriches and challenges my creative methodologies and processes. Sometimes I actively involve the audience in the creative process. This can include the participation in a sound recording walk to collectively build an online interactive soundmap. This invitation to actively listen and record sounds shares an important element of my own creative process.

I aim to create work that generates a poetic and reflective audience experience that enriches an appreciation of the everyday, inviting a heightened awareness of the world around us combined with a sense of how we interact with each other, nature, technology and machine systems.

“Our intention is to affirm this life, not to bring order out of chaos, nor to suggest improvements in creation, but simply to wake up to the very life we’re living, which is so excellent once one gets one’s mind and desires out of its way and lets it act of it’s own accord.” John Cage.
.
.
.
.
.
.
.
source: vimeo
Kathy Hinde’s music merges machinery and natural stimuli to create stunning sound and visual aesthetics. Her music and visual art grows from a partnership between nature and technology. Her sculptural sound installation, Tipping Point, invites us to consider our relationship with water, and the necessity of balancing how we use the world’s water resources.
Tipping Point explores the sonic complexities and possibilities of combining glass vessels with shifting water levels. Sound tones are produced live via a microphone that feeds back inside each glass vessel. As the water levels change, the feedback is tuned to different pitches based on the resonant frequency of the remaining space in each glass vessel. The work forms both a sound sculpture and the basis of a live performance.
A Cryptic commission for Sonica, Tipping Point is a collaboration with John Rowden at the Scientific Glass Workshop in the School of Physics at the University of Bristol with software designed by Matthew Olden.