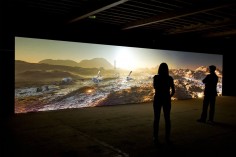 Mariner 9 presents a panoramic view of a Martian landscape set hundreds of years into the future, littered with the rusting remains from various missions to the planet. Despite its suggested abandoned state, several of the spacecraft continue to partially function, to do their intended jobs, to ultimately find signs of life, possibly transmitting the data back to no one.

Mariner 9 was created using scenery-generation software employed by the film and gaming industries in combination with technical data from NASA’s missions to Mars to produce a faithful artist’s rendering of Martian terrain, populated by the debris from centuries of exploration through real and imagined spacecraft in the centre of a duststorm. “Cinematic tropes of sci-fi films abound, but any search for a clear narrative is frustrated. Presented with minimal action, we wonder instead about the search for life beyond our own planet and the simultaneous destruction of life on earth.” (Laurel MacMillan, Programmer for TIFF Future Projections)

Coinciding with the landing of NASA’s Mars Science Labroratory aka “Curiosity” on the planet at the beginning of August, in a 12-metre long panoramic installation Richardson’s Mariner 9 saw its world premiere in the raw splendour of the Spanish City Dome in Whitley Bay, August 3 – August 19, 2012.

Richardson has been widely acclaimed in North America, Asia and Europe. Her work was selected for the Beijing, Gwangju and Busan biennales, and major moving image exhibitions including the The Cinema Effect: Illusion, Reality and the Moving Image at the Hirshhorn Museum and Sculpture Garden (Washington, USA) and Caixaforum (Barcelona, Spain), Videosphere: A New Generation at the Albright-Knox Art Gallery (Buffalo, USA) and Visions Fugitives at Le Fresnoy (Tourcoing, France). Her video installations have been included in the Toronto International Film Festival as part of Future Projections (2012), Sundance Film Festival in New Frontier (2011 and 2009) and in 2009, she was honoured as the featured artist at the Americans for the Arts National Arts Awards. Richardson’s work has been acquired by major museums across the UK, USA and Canada, from the Hirshhorn Museum and Sculpture Garden and Albright-Knox Art Gallery to the National Gallery of Canada, Art Gallery of Ontario, Musée d’art contemporain de Montréal and the Towner.