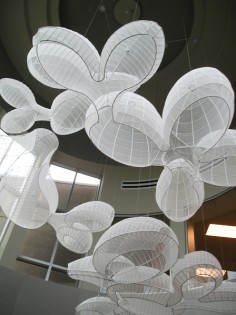 Kendall Buster earned a BFA degree from the Corcoran College of Art and Design in Washington DC and an MFA in Sculpture from Yale University as well as participating in the Whitney Museum’s Independent Study Studio Program in New York City.

Her work has been exhibited in numerous venues nationally and internationally including the Hirshhorn Museum and the Kreeger Museum in Washington, DC, Artist’s Space and the American Academy of Arts and Letters in New York City, the Haggerty Museum in Milwaukee, the Kemper Museum in Kansas City, the Boise Art Museum in Boise, Idaho, Suyama Space in Seattle, Washington, the Bahnhof Westend in Berlin, and the KZNSA Gallery in Durban, South Africa.

Buster has created commissioned sculptures for the DC Convention Center and Wilmer Cutler Hale in Washington, DC, Markel Corporation and Massey Cancer Center in Richmond, VA, The Science Center at The Episcopal School in Alexandria, Virginia, The Bank of Oklahoma Arena in Tulsa, as well as a roof-top sculpture at The Nevada Museum of Art in Reno. Buster also recently completed a sculpture commission for The Agave Branch Library in Phoenix, Arizona. Upcoming projects include commissions for The Indianapolis Museum of Art’s Virginia B. Fairbanks Art and Nature Park, The New Chemistry Building at Princeton University, Gilman Hall at Johns Hopkins University in Baltimore, and The San Francisco International Airport.

Buster has been interviewed by Neda Ulaby on NPR’s Morning Edition as part of a series on art and science and was the recipient of a 2005 American Academy of Arts and Letters Award in the Arts. She currently lives and works in Richmond, Virginia and is a Professor in the Department of Sculpture and Extended Media at Virginia Commonwealth University.
.
.
.
.
.
.
.
source: encyclopediaofalabama

Alabama-born artist Kendall Buster (1954-) is widely regarded as one of the most innovative sculptors in the United States because of the unusual merger of art and science in her work. Trained as a microbiologist, Buster creates sculptures that have been described as “biological architecture,” that reference the molecular world by recreating its shapes and forms on a massive scale. Buster sometimes collaborates with her husband, South African artist Siemon David Allen (1971-), whom she married in 1997.

Kendall Buster was born in Selma, Dallas County, on September 15, 1954, the only child of Ralph DeWitt Buster and Jennie Kendall Traylor Buster. Raised outside of Selma in the town of Sardis, where her father served as postmaster, she attended Selma’s John T. Morgan Academy from 1965 to 1972. In 1972, Buster entered the University of Alabama, where she studied microbiology, receiving a bachelor’s degree in medical technology in 1976. Upon graduation, she moved first to Tampa, Florida, where she worked as a medical technologist in the laboratory at the All Children’s Hospital. In 1977, she moved to Washington, D.C. During this time, she visited art museums in Washington and New York City, experiences that by 1978 led to her take art classes at Washington’s Corcoran School of Art (now Corcoran College of Art and Design) and the University of Maryland in College Park. In 1979, Buster enrolled full time at the Corcoran, receiving her BFA in 1981. In 1984, she completed the Independent Study Program of New York’s Whitney Museum of American Art and in 1987 received her MFA in sculpture from Yale University in New Haven, Connecticut.

While still working in a clinical medical laboratory, Buster became captivated by the beauty of what she observed with her microscope and began to make drawings of what she has called the “landscape” she saw through her lens. In art school, she shifted her focus to creating large-scale sculptures resembling cellular structures. The transition from flat to sculptural works occurred when Buster began to configure her two-dimensional paintings into three-dimensional architectural spaces, accessible by the viewer.

Garden Snare
Buster’s works typically consist of a semitransparent shadecloth “membrane” stretched over a large cage-like frame constructed from bent and welded steel rods. In some works, the membrane is made of paper, insect screening, thin steel sheeting, or beeswax. Many of Buster’s works encourage the viewer to walk inside of them. Many of Buster’s works are commissioned for a predetermined natural or human-made setting and are designed specifically for that particular locale by considering and responding to the environment in which the work will reside. One such site-specific sculpture, Garden Snare (1998) created for the Kreeger Museum, in Washington, D.C., is a shade house consisting of two conjoined chambers resembling a dividing cell. The chambers have low, discreet entrances that require the viewer to stoop down to step inside. The inconspicuous entrances help preserve a sense of total envelopment once inside, and the shade cloth membrane provides shelter from the sun but still enables the viewer to see the surrounding garden. A square opening at the top of each chamber permits natural light to enter and also frames a view of the sky.

The Kendall Buster sculpture Resonance hangs in the
Resonance by Kendall Buster Buster also has created a number of site-specific hanging sculptures. One example, Resonance (2010), housed at the Frick Chemistry Laboratory at Princeton University, in Princeton, New Jersey, was designed and built in collaboration with Siemon Allen. It consists of six groupings of interconnected translucent circular and oval forms, ranging in size from 8-by-3 feet to 16-by-10 feet, suspended from a 75-foot-high glass atrium roof with stainless steel aircraft cable. According to Buster, the forms, which resemble cells splitting and dividing, were partially inspired by the models used to represent molecular structures.

In 2010, Buster was one of eight artists commissioned to create a work for the opening of 100 Acres: The Virginia B. Fairbanks Art and Nature Park at the Indianapolis Museum of Art, in Indianapolis, Indiana. Buster created Stratum Pier, a series of curved and layered platforms along the park’s lakeshore that provide a viewing area from which to experience the surrounding environment. The stratified, undulating forms of the
Stratum Pier
platforms are meant to reference the landscape itself, bringing to mind the contours on a topographical map and also referring to the natural process of erosion and growth. The work was constructed from emerald green fiberglass to blend in with the surrounding landscape, with grasses and brush growing around it.

In addition to numerous permanent site-specific works, Buster’s work has been exhibited at numerous galleries and museums throughout the United States, including the Hirshhorn Museum in Washington, D.C., the American Academy of Arts and Letters in New York, the Haggerty Museum of Art in Milwaukee, and the Kemper Museum of Contemporary Art in Kansas City. Internationally, her work has been shown at the Bahnhof Westend in Berlin and the KZNSA Gallery in Durban, South Africa. In 2005, Buster received an award from the American Academy of Arts and Letters. Buster lives and works in Richmond, Virginia, where she is a professor in the Department of Sculpture and Extended Media at Virginia Commonwealth University. She previously taught at the Corcoran College of Art and Design in Washington, D.C., and at Maryland Institute College of Art in Baltimore, Maryland.
.
.
.
.
.
.
.
source: kendallbuster

This variation on Parabiosis was commissioned by the Markel Corporation in Richmond, Virginia. It was designed and built specifically for an unusual cylindrical shaped boardroom with a high ceiling and clear story windows. Five separate forms were suspended at various heights, but when viewed from below in the boardroom they appeared to overlap and merge. These were non-identical forms, but of a like phenotype. They inhabited the region marked by the circular band of the clearstory windows and suggested a potential to float and reconfigure at any time.