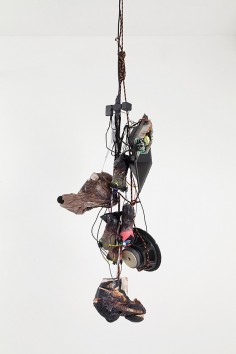 Kevin Beasley was born in Lynchburg, Virginia, in 1985. He attended the College of Creative Studies, Detroit, where he studied automotive design before graduating with a BFA in painting and sculpture (2007) and an MFA in sculpture from Yale University, New Haven (2012). Working in the media of sculpture, installation, sound, and video, Beasley combines disparate found materials including personal ephemera, studio debris, and samples from various musical genres to produce works that embody their process of creation while also defamiliarizing the everyday objects and cultural references of which they are composed.

Beasley’s sculptures are novel hybrids of assemblage and process art. The artist takes found objects—most often clothing—as his starting point and excavates their personal and cultural meanings. Using malleable substances like resin and polyurethane foam as the glue that holds the items together, Beasley produces his sculptures through a process of molding and manipulating the adhesive material and objects into a final form. He works for only as long as the resin takes to harden, allowing the inherent properties of the material to establish the temporal boundaries of the process and the finished form of the sculpture. The final sculptures, which suggest the detritus of modern culture embedded in molten strata, index their own process of creation, with the actions of the artist’s body impressed on their surface.

In Jumped Man (2014), two rocklike pieces of resin are placed on the gallery floor, each affixed with an Air Jordan sneaker. The earthen quality of the brown resin starkly contrasts with the pristine whiteness of the sneakers, suggesting a process of refinement from raw material into a finished product. As a metaphor for liberating flight, Air Jordans signify social and economic mobility as both a status symbol and a reference to the extraordinary accomplishments of Michael Jordan. Yet, by casting them in resin, Beasley has rendered the Air Jordans decidedly earthbound, revealing the near impossibility of their wearers ever being “like Mike.”

Using both sculpture and musical performance in his practice, Kevin Beasley explores the physical materiality and cultural connotations of both objects and sound. His sculptures typically incorporate everyday items like clothing, housewares, or sporting goods, bound together using tar, foam, resin, or other materials. Often they also contain embedded audio equipment that warps and amplifies the ambient tones of their surroundings. For Storylines, Beasley has created two new works specifically for the Guggenheim’s Frank Lloyd Wright–designed building. Within this vast and open sonic environment, Strange Fruit (Pair 1) and Strange Fruit (Pair 2) (both 2015) offer an experience of intimacy, absorbing and reflecting the sound of the crowd at the scale of a personal conversation. Each work embodies this spirit of dialogue in its two-part structure—at its core are two athletic shoes, one merged with microphones, the other with speakers. Suspending these objects in space, Beasley compounds their technological interchange with additional layers of meaning, bringing to mind the urban phenomenon of shoes hanging from overhead wires or poles (itself an open-ended form of communication). At the same time the works’ titles refer to history of lynchings in the American South memorialized by Bronx schoolteacher Abel Meerepol in the 1937 protest song “Strange Fruit.” In these contexts, the hanging forms of Beasley’s sculptures resonate not only with his body, which molded them by hand, or with the bodies moving through the museum, but also with those inscribed in the problematic history of race and class in the United States.