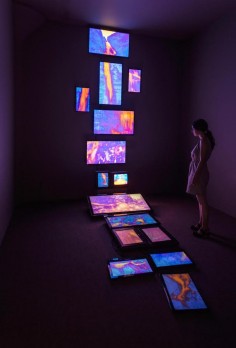 Fallen Water explores questions about why humans are drawn to waterfalls and flowing water as a source for renewal. Waterfalls imbue subconscious associations with pristine and healthy drinking water, but what happens when the fountain can no longer renew itself? Is the water no longer pure? Cooley’s choice of subject matter strikes a deep chord with current social consciousness and anxieties about contemporary water usage and the drought crisis faced by the American West. Cooley references Blake’s famous quote from The Marriage of Heaven and Hell as context for the diametric opposites of the current water conundrum: our deep sense of entitlement to and dire dependence on this precious commodity, coupled with a pervasive obliviousness concerning the sources which supply it. As a way to connect with his personal water use, Cooley hiked into the mountains to see firsthand the snowpack (or lack thereof), streams, and aquifers which feed the water sources supplying his Los Angeles home. This multi-channel installation is an amalgamation of videos made over numerous trips to remote locations in the San Gabriel Mountains, the Sierra Nevada Mountains, and locales as far away as the San Juan Mountains in Southwestern Colorado. These disconnected video vignettes coalesce, constructing a large water landscape canvasing the gallery walls and floors – reflecting the disparate and widespread origin of Los Angeles’s drinking water. The colorspace within the videos is inverted, turning the water pink, orange and yellow—channeling an altered vision of water—in which something is definitely amiss: a stark reminder of the current water crisis in the state of California.
.
.
.
.
.
.
.
source: molecule-f

Phillip Andrew Lewis is a conceptually-based artist working in photography, objects, digital media, video, sound and installation. His creative research often responds to historical events, psychology, and phenomenology. This work consistently examines duration, perceptual limits and attentive observation. In addition to Lewis’ individual studio practice, he is actively involved in the process of collaboration with artists, professionals, and other groups.

Phillip has exhibited his work both nationally and internationally. He received a 2012 Creative Capital Grant in Visual Art for his ongoing long-term project entitled SYNONYM. He has also received generous support for his research from the Foundation for Contemporary Art in New York, Bemis Center for Contemporary Art, The Center for Creative Photography, Tennessee Arts Commission, MakeWork, University of Tennessee, and the Urban Arts Commission. In 2005, Phillip co-founded Medicine Factory, an independent arts organization in downtown Memphis committed to supporting installation-based works. He currently teaches in the photography and media art program at the University of Tennessee in Chattanooga.
.
.
.
.
.
.
.
source: creative-capitalorg

Phillip Andrew Lewis is a Tennessee based artist working in video, sound, photography, sculpture and installation. His creative research responds to historical events, psychology, phenomenology and physics. This work consistently examines duration, perceptual limits and attentive observation. In addition to his individual pursuits, Lewis is involved in a series of long-term evolving collaborations. Lewis is the recipient of awards from numerous organizations including the Bemis Center for the Arts Fellowship, the Foundation for Contemporary Arts Emergency Grant and the Tennessee Arts Commission, where he received an Individual Artist Fellowship, among others. He currently teaches in the photography and media program at the University of Tennessee in Chattanooga.