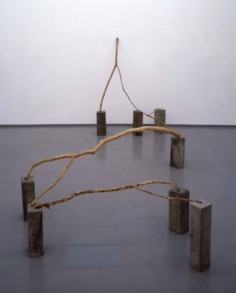 source: artsynet
Kishio Suga is a leading figure of the Mono-ha movement—Japanese for “the school of things”— known for their radical use of elemental materials. He studied oil painting, but is best known for his multi-media sculptures, installations, and spatial interventions. Suga describes his process as one of “re-conceptualization” and of discovering the “unfamiliar phrasing” of what appears familiar in day-to-day life. He favors the use of commonly found-though-unconventional artistic materials, like timber, rock, sand, concrete, and empty space. Using this limited array, the artist explores the relationships and potential associations that arise from combining objects. Suga also makes works on paper with more frequency at the beginning of his career.
.
.
.
.
.
.
.
source: dajforguk
Kishio Suga was born in 1944 in Morioka city, Japan. He graduated in painting from Tama Art University in 1968. For forty years, since his first solo show in 1968 to the present, Suga has participated in numerous exhibitions. Large-scale solo exhibitions among these have been Uncertain Void: Installation by Suga Kishio at Iwate Museum of Art (2005), Kishio Suga: Stance at Yokohama Museum of Art (1999), and a touring exhibition, Kishio Suga Exhibition, at Hiroshima City Museum of Contemporary Art; Itami City Museum of Art; Kanagawa Prefecture Gallery and Chiba City Museum of Art (1997). He has also been active internationally, participating in Mono-ha – school of things at Kettle’s Yard, Cambridge, and Newlyn Art Gallery (both 2001), a touring exhibition Japanese Art after 1945: Scream against the Sky at Yokohama Museum of Art, Japan; Guggenheim Museum New York and San Francisco Museum of Modern Art, (1994), Japon de Avant Gardes 1910-1970 at Le Centre Georges Pompidou, Paris (1986), and showing at The 38th Venice Biennale (1978), among many other exhibitions. Suga’s works will be part of the permanent collection of the Soko Gallery, which opened in August 2008 in Itamuro, Tochigi Prefecture, Japan.