The Dark Side Of The Moog 8 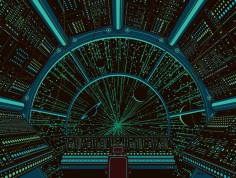 Pete Namlook (aka Peter Kuhlmann) and Klaus Schulze developed and nurtured The Dark Side of the Moog series. The Dark Side of the Moog 5 also features Bill Laswell. (He has collaborated on four of the CDs.) One of the coolest things on this disc is a 14-second intro by Robert Moog himself. Namlook, Schulze, and Laswell used “Adam’s Psychedelic Brunch” as their base track title, a play on Pink Floyd’s “Adam’s Psychedelic Breakfast” from Atom Heart Mother. And, as listeners expect, this CD features the sequences, atmospheres, and ambience associated with this trio. The soundscape elements flow seamlessly within the intricate sound design. Namlook, Schulze, and Laswell are always at the top of their game. This Berlin school offering will appeal to fans of Ron Boots, Edgar Froese, Ian Boddy, and Paul Ellis.
.
.
.
.
.
.
.
source: allmusic

Peter Namlook and Klaus Schulze reunite once more for Dark Side of the Moog 8, which features the eight-part work “Careful With the AKS Peter.” As the title suggests, the song features the Synthi AKS prominently in its ambient explorations and improvisations, creating soothing, spacious yet intricate analog soundscapes. Though it might not be the most immediately engaging volume of the series, another Dark Side of the Moog album is always welcome.
.
.
.
.
.
.
.
source: itunesapple

As both a solo artist and as a member of groups including Tangerine Dream and Ash Ra Tempel, Klaus Schulze emerged among the founding fathers of contemporary electronic music, his epic, meditative soundscapes a key influence on the subsequent rise of the new age aesthetic. Born in Berlin on August 4, 1947, Schulze began his performing career during the 1960s, playing guitar, bass and drums in a variety of local bands; by 1969, he was drumming in Tangerine Dream, appearing a year later on their debut LP Electronic Meditation. The album was Schulze’s lone effort with the group, however, as he soon co-founded Ash Ra Tempel with Manuel Gottsching and Harmut Enke, debuting in 1971 with a self-titled record; again, however, the band format appeared to stifle Schulze, and he mounted a solo career a few months later.

While Schulze’s previous recorded work had been in a typically noisy Krautrock vein, as a solo artist he quickly became more reflective; although he acquired his first synthesizer in 1972, it did not enter into his solo debut Irrlicht, its long, droning pieces instead assembled from electronic organ, oscillators and orchestral recordings. The double album Cyborg followed in 1973, and a year later he issued Blackdance, his first recording to feature synths; Timewind, regarded by many as Schulze’s masterpiece, appeared in 1975. Around that same time he began producing prog-rockers the Far East Family Band; the group’s keyboardist, who went on to become the new age superstar Kitaro, frequently cited Schulze as the central influence behind his own plunge into the world of synths and electronics.

After collaborating with Stomu Yamash’ta on 1976’s Go, Schulze resurfaced with a flurry of new solo material, including the LP Moondawn, 1977’s Mirage and two volumes of the porn soundtrack Body Love. He remained extraordinarily prolific in the years to follow, with 1979’s Dune, inspired by the Frank Herbert sci-fi classic, becoming his 11th solo record released during the 1970s alone. The 1980s were no less fertile, with Schulze issuing a steady stream of new work in addition to various productions released on his own IC label; Dig It was his first fully digital recording. By the following decade, Schulze had immersed himself in contemporary dance music, occasionally working in conjunction with Pete Namlook (as Dark Side of the Moog). The first half of the 1990s also saw Schulze experiment with sampling, starting with the album Beyond Recall, but these forays largely ended in 1995 with the release of In Blue. Ten years later, he began re-releasing his earlier works and collaborating with Lisa Gerrard of Dead Can Dance. In April 2008, Schulze released Kontinuum; he also released Farscape, a joint project with Gerrard, in June of the same year.