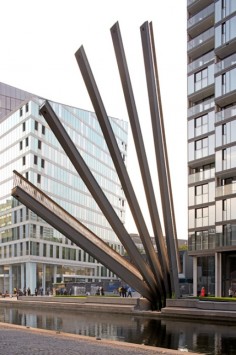 British firm Knight Architects and structural engineers AKT II have completed a moving footbridge in Paddington, London, that opens and closes like the blades of a traditional hand-held fan.

The architects, who specialise in bridge design, won a limited competition to design the crossing in 2012 with their plans for a “kinetic sculpture” that could rise to allow canal boats to pass along the waterway.

Opening in sequence, the bridge’s five beams rise to different angles to create a fan-like effect. The first rises to 70 degrees, while the last lifts high enough to create a clearance space of two and a half metres over the surface of the canal. The weight of the beams – which range from six to seven tons – is balanced by a 40 ton counterweight that keeps the beams steady as they rise and fall.

When fully closed, the bridge is safe for pedestrians and offers a three metre wide crossing.

“Shaped counterweights assist the hydraulic mechanism and reduce the energy required to move the structure,” explained the architects and engineers in a statement.

“The bridge balustrades are formed from twin rows of inclined stainless steel rods, overlapping to form a robust yet filigree and highly transparent structure.”

The handrail formed by these balustrades features a built-in strip of LED lighting to illuminate the crossing at night. Like Heatherwick’s bridge, the structure opens every Friday to let boats sail past.

The bridge is part of a wider regeneration project for the site, with future plans including a garden square with an events space and water maze. A total of six new buildings will be constructed, with three already complete.

This apostrophe-shaped bridge in Hull, England, by London architects McDowell+Benedetti features a rotating mechanism so it can swing open to make room for passing boats.