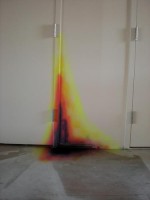 “pieces where I am looking into walls
with a thermal camera (seeing the heat
of the different materials) and then
reproducing the infrared version of the
wall on top of our visible spectrum.
the pieces are made with sprayed tempera
paint which moves over whatever happens
to be in the space that I am looking at.” – lance winn
.
.
.
.
.
.
.
source: materialcultureudeledu

Winn’s personal work searches for the language embedded in processes of reproduction. From painting to robotic projection and three-dimensional modeling, he investigates a poetics of construction that might speak to current conditions, particularly as they relate to mediation and technology. His academic research is directed most specifically towards a dialectics of modernity, best represented by Benjamin’s Arcades Project, and extending into material culture, architecture, and the effects of time on objects. Alongside this research Winn is studying alternate systems of visualization, particularly thermal imaging and other ways of seeing outside the visual spectrum, and is working with ways of capturing three-dimensional information. Through a University grant he is studying three-dimensional scanning and other dimensional digital inputs as well as large scale methods for outputting models from virtual space, leading to a collaboration with the Center for Historic Architecture and Design involving the digital capture and dissection of vernacular structures-destined for demolition-in an attempt to preserve these buildings virtually.

Winn is faculty in the Center for Material Culture Studies where he has been a part of several colloquia, including the “Spaces of Shopping” which is being turned into a book. He has lectured on his own work at Universities across the U.S., recently at the University of South Florida, and at the University of Puerto Rico Mayaguez where he ran a workshop on “Post-Colonial Collage.” He has published catalogue essays for “Reproduction” at Lemberg Gallery; for Brian Bishop’s solo show titled “Pause” at University of Delaware; and for a show he curated at the University of Delaware Galleries called “InWords,” that included an international group of artists who work with language as material. Most recently he co-wrote the essay “The Object of Nostalgia” with colleague René Marquez for a show they curated at Columbia College in Chicago.

Winn’s personal work has been included in a range of recent books including three-dimensional typography and Paul Virilio’s influence on contemporary artists. He has been nominated for the Louis Comfort Tiffany Award for painting, and his work was represented in an article on new forms of drawing that was published in Contemporary Magazine. Winn’s work has been shown nationally and internationally and in 2007 was part of a five-year survey at the Freedman Gallery.

In collaboration with Simone Jones, Winn’s robotic projections has been shown most recently as a part of Nuit Blanche in Toronto, at the Ronald Feldman gallery in New York, and the Icebox in Philadelphia. Their work was presented at the Electra Festival, in “Stop,” a two-part show of international artists in Montreal, at the Banff Center for the Arts in Canada, “Media City 11 International Festival of Experimental Film and Video Art” in Windsor, Ontario, and in “Machine Life” at the Davies Foundation and Samuel J. Zacks Galleries in York, Ontario. Their most recent collaboration “End of Empire” will be shown in the Montreal Biennial.
.
.
.
.
.
.
.
source: imperfectcitydccawordpress

Lance Winn taught at Carnegie Mellon University and the University of Chicago prior to coming to the University of Delaware where he is the M.F.A. coordinator and works with Graduate and Undergraduate students in the Arts. He has been a visiting lecturer at the Cleveland Art Institute, Cranbrook Academy of Art, Rhode Island School of Design, Penn State, the University of Alabama, St. Mary’s College of Maryland, and Mt. Holyoke; and has presented papers at Delta College, the Southeastern College Art Association, and, in February, he hosted the panel “Painting and Plurality” at College Art Association Conference in New York City.

In the field of art, Winn has published catalogue articles for “Reproduction” at Lemberg Gallery, in Detroit; an essay for Brian Bishop’s solo show titled “Pause” at University of Delaware; and, most recently, the catalogue essay for a show that he curated at the University of Delaware Galleries called ““InWords,” that included an international group of artists who work with language as material.

Winn’s personal work led to his nomination for the Louis Comfort Tiffany Award for painting last year and to his work being represented in an article on new forms of drawing that was published in Contemporary Magazine, out of London, in the Fall of 2006. Important shows include “Knock” at the Banff Center for the Arts in Canada; “Mediated” at Clarion University”; “Media City 11 International Festival of Experimental Film and Video Art” in Windsor, Ontario; “Machine Life” at the Davies Foundation and Samuel J. Zacks Galleries in York, Ontario; and “Violent Violence” at the Gallery Art et Amicitiae in Amsterdam, Holland. Winn has a five year survey of his work opening in November of 2007 at the Freedman Gallery at Albright College, and he and Simone Jones’ most recent collaborative robotic video projection “Knock,” which received funding to be produced and shown at the Banff Center for the Arts, will move the Montreal for its second full scale installation.