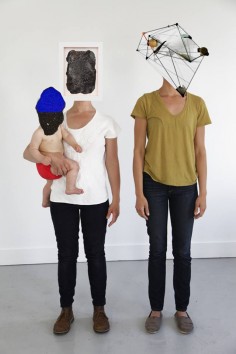 Las Hermanas Iglesias are Lisa and Janelle Iglesias, a collaborative team of sisters who were born and raised in Queens, New York. As second-generation Norwegian-Dominicans, their work often comments on bridging disparate materials and practices. Lisa Iglesias received her BA from Binghamton University and her MFA in painting and drawing from the University of Florida in 2006 while Janelle received a degree in cultural anthropology from Emory University and her MFA in sculpture from Virginia Commonwealth University, also in 2006.

While in graduate school, Lisa and Janelle began to mail drawings back and forth through the post in order to experiment with visual imagery and conceptual tendencies. Interested in the potential of these visual conversations about their shared history and individual approaches, they formed Las Hermanas Iglesias. Since then, Las Hermanas have shown collaboratively in several exhibitions on the East Coast while Lisa and Janelle have independently shown their work and have received various fellowships at such residencies as the Provincetown Fine Arts Work Center, the Santa Fe Art Institute, the Bemis Center for Contemporary Art, the Vermont Studio Center and Sculpture Space. While they have received various grants and accolades individually, the LMCC Paris residency was their first opportunity to focus solely on their collaborative efforts.
.
.
.
.
.
.
.
source: riotofperfume

Sisters and artists Lisa and Janelle Iglesias collaborate under the moniker Las Hermanas Iglesias, mining their family history and shared experiences to create multimedia and often performance-based works. Their art considers issues such as cultural heritage, the body, and competition, often with a hint of absurdity folded in.
.
.
.
.
.
.
.
source: lashermanasiglesias

THEIR COLLABORATIVE EFFORTS INCLUDE:

-A SYNTHESIS OF THEIR INDIVIDUAL WORKS CALLED LISA & JANELLE

LISA IS AN ASSISTANT PROFESSOR OF DRAWING & PAINTING AT THE UNIVERSITY OF FLORIDA AND A NEW MOTHER. SHE’S A SNOWBIRD WHO RETURNS TO NYC FOR THE SUMMER MONTHS.

AFTER RETURNING FROM THE RAINFORESTS OF WEST PAPUA (A RESEARCH TRIP FUNDED BY THE JEROME FOUNDATION), JANELLE WILL BE DIGESTING HER EXPERIENCES INDEFINITELY. SHE’S BASED IN BROOKLYN BUT OFTEN WORKING ON PROJECTS IN OTHER PLACES.

LIKE EVERYTHING ELSE, THIS SITE IS CONSTANTLY IN FLUX.