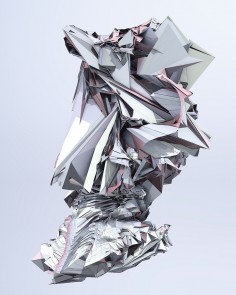 “LaTurbo Avedon is a social media avatar and artist. Her work has been enabled by an ever-growing network of friends and collaborators, allowing her to participate in both online and offline exhibitions internationally. Residing entirely on digital platforms, her work ranges from character creation in video games to constructing entirely new virtual environments to inhabit.

Beside LaTurbo Avedon‘s main creations, you’ll be able to find amazing pararell online series, such as ‘png Island‘ or the beautiful pieces in ‘New Sculpt‘. The process for New Sculpt has been to reinterpret photographs using various 3D rendering tools. Returning to the now-aged Second Life platform, LaTurbo Avedon used the process of importing sculpt maps or ‘sculpties’ as a way to look at images differently.

LaTurbo Avedon explains: Where the rendering engine is anticipating a prepared sculpt map, which often looks like a smooth gradient of several colors, I am instead feeding it a much more complicated sequence of colors when I give it a photographic image. Whether the imported image is a portrait of Brad Troemel or documentation of a Mark Rothko painting, each has its own conversion to a three-dimensional shape. The resulting objects are often duplicated and arranged to create new formations.”
.
.
.
.
.
.
.
source: blogpatternbank

LaTurbo Avedon’s colourful digitally fractured creations. LA based, social media avatar and artist caught our eye recently with her amazing online computer generated pieces. Using various 3D rendering tools LaTurbo reinterprets photographs to create some mesmerizing digital imagery.
.
.
.
.
.
.
.
source: artparasites
LaTurbo Avedon is an “artist-render” (online avatar) making ground-breaking new image-sculpture works that transcend the realm of the physical and only exist inasmuch as your responses to them.
LaTurbo Avedon is, simply put, a girl making artwork online; someone who looks we-don’t-know-how and is located we-don’t-know-where. Her name could be a cheeky reference to the naming system in place within the IRL (in real life) vogue subculture, but in her virtual environments she appears as a rather attractive, sharp-looking white girl—she is really pretty, at least from what all her curated pictures describe. But to call these images “pictures” might be deceiving; they are structured to approximate the lens of a photojournalist who is engaged with the subject matter, yet involve none of these elements and still entice the human psyche into inhabiting/experiencing them as photographs. They are also self-portraits, taken from the vantage point of someone who is a voyeur onto themselves, which is maybe why this work is so endlessly enticing.​
What You See Is What You Get?
What Laturbo Avedon’s work offers us is accessible transcendence. The subject, the artist herself, both exists and doesn’t. Perhaps at some point in art history we might have to begin to evaluate screen captures from the quality and delicacy behind the mind that makes the decision to record things in this manner. As of now, we are still content to revel in the newness – this otherness – that we find running wildly through the spaces that LaTurbo Avedon approximates for us.
A few things come to mind when I look at LaTurbo’s work. In the pre-internet dinosaur days of the world (around 1994), I was a huge fan of video games. This was a time when the only places that had access to game systems like Neo-Geo and Super Grafx, and also Japanese games remaining unreleased in America, were the big capital cities in the States. One of the first titles released for the Neo-Geo game system (the console itself a black matte plastic behemoth of financial and graphic excess) was a motorcycle racing game, Riding Hero. Players could choose between Hero or Story mode, the former consisting of racing your superbike down a relatively devoid 2-d track – the latter providing at least a developing story arc for the rather repetitive and lifeless races. You were provided on the main map with an option to go “Home,” and when you did, you were greeted by a screen that was a banal, idealized approximation of a young up-and-coming Japanese motorcycle racer’s apartment.
The sunlight is filtering in through the drawn shades at what looks like a perfect 4:30 afternoon sun dimming, the room warm in a delicate amber glow, the light playing off of the ashtray and cigarettes on the table, the unkempt bed with its carefully strewn-about clothes. You could choose to eat, or rest, or save your game here, but I found myself choosing to make no choice: I found myself never wanting to leave this screen. It was as if I had found a place that something else outside of me could settle in, it was the sole reason I loved to play this rather stupid game, to stay “home.” Japanese video games seemed to always explore this indescribable notion of digitally illustrating comfort, where American titles at the time did not (though these aesthetics eventually became par for the modern developer’s course in game environment architectures).
Why did I like to stay on that screen? I was escaping into a place of no consequence, of safety even from the time clock of my own aging. The screen offered me a place to both escape from reality and watch the phenomena of my own escaping from it, the soul tricked into enlightenment by pixels. I wanted to be eternally trapped in that apartment in a forever afternoon, reliant on nothing but the sustained tranquil pleasure of that falsified space.
The Artist Is Virtually Present
Even LaTurbo’s last gallery opening (held both in large-scale print form in New York City and online in Second Life at Catalina Cove), holds the sculptures she has made in an inferior setting. The works have to be set somewhere but galleries always confine the magic that lies dormant in anything we dare call art. We are distracted by the context, the people, the avatar of someone who is a floating naked woman with the head of a rabbit holding a bewitchingly huge cannon-death-weapon-thing. But LaTurbo’s work is about you, the inner one, experiencing it yourself on the screen and fantasizing about it being real – I love to share this work but I hoard it!
When looking at the series Transplanted Objects, a sound of ambient noise in quiet nature plays on your computer speakers. The effect is what the best art offers you: profound beauty in solace and a chance to forget yourself. And her New Sculpt series is among the more exciting things I have ever seen in the arts. These things look like dead and alive graffiti cut into a million pieces that were ate up and barfed by God who in turn is forever playing with their shape and color.
They appear scaleless, giant miniatures which force their hallucinated densities through the 860px-wide jpgs that barely approximate their many facets. These pieces don’t exist but took work and taste to make them, so they are something. And they make me wild. So this is what they are: how they function for you. They they don’t cost you anything to experience, but you still want them.