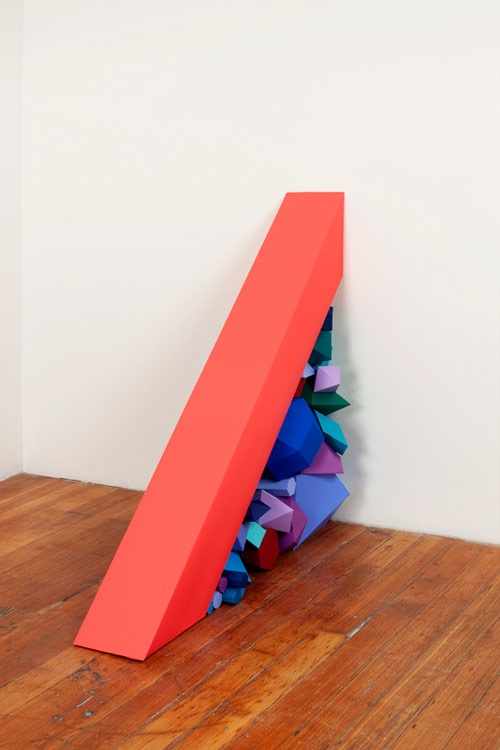 An amazing series of sculptures by Brooklyn-based artist Lauren Clay who recently obtained her MFA in Painting and Printmaking at Virginia Commonwealth University. She creates 3-dimensional sculptures by meticulously layering strips of “papier mâché” and painted paper to produce these intriguing and colorful organic shapes.
.
.
.
.
.
.
.
source: lvl3

Lauren Clay grew up in the suburbs of Atlanta. She received her BFA in painting from Savanah College of Art and Design and her MFA in painting and print making from Virginia Commonwealth University. After graduating VCU, she moved to New York in 2007. My work utilizes the mythology of modernist form and thought as a vehicle for exploring matters of the psyche, metaphysics, perception, and alternate realities. The traditional forms of modernism (such as monochrome painting, the plinth, and the grid) become like characters that play out my personal anxieties and quandaries—both art-historical and existential. By utilizing these forms I am also addressing the trappings of historical context. I come from a family of artists, obsessive craftspeople, and do-it-yourself-ers. Just in my immediate family alone you will find a photographer, a musician, a potter, a flint-knapper, a seamstress, a conceptual artist, a soap maker, a couple of carpenters, a stained glass artist, and a spoon carver. We like to make stuff. When I was growing up, our house was full of projects and I’ve always felt very comfortable making things. Early on I began to lean towards drawing and painting. I went on to get both my BFA and MFA in painting. – Lately I’ve been making a series of large wall pieces. I’ve been thinking of them as big fat shaped monochromes. They are dimensional and have a very layered, textured surface— further confusing and questioning the support’s ability to exist as both object and image.

In these works I’ve been exploring the idea of the painting support as a non-image, and the surface as non-painting. They are all about transformation, and flatness versus physicality. Paintings in an existential crisis.

Lately my work has changed a lot. My past work consisted mostly of sculptures assembled from smaller objects. Currently I’ve been making work that has a more focused dialogue with painting, and drawing less on outside references for imagery. I am more interested in pattern, texture, and faux surfaces. Recently I discovered through a friend’s recommendation the writings of Carlos Castaneda. I am totally fascinated with his descriptions of altered states of reality through the use of shamanistic practices and plant-based hallucinogens, as taught to him by a native Mexican man of the Yaqui tribe. There is a lot of skepticism and mystery surrounding his writings. Whether it’s fiction or fact, doesn’t really interest me, as there is so much truth and symbolism to be gleaned from his writing.