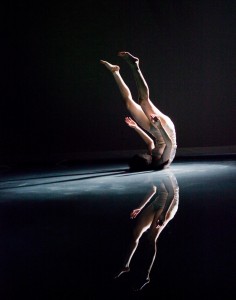 Work: Floating Point Waves is an environment of strings, water, solo performance, real-time video, and live electronic music that unveils the relationship between the human body and natural elements. Movement, water, and light respond to one another as an organic causal chain unfolds, echoing that of our own natural world. Startling performance and exquisite design reverberate through the space, framing a landscape where beauty coexists with darkness.

The work of LEIMAY: Ximena Garnica & Shige Moriya, the duo behind CAVE, The New York Butoh Festival, and the Williamsburg SOAK festival ranges from photography, video art, art installations, and stage pieces to interdisciplinary collaborations and training projects. Rooted in the body, LEIMAY creates sculptural, video, and light installations as well as contemporary performances known for the synergistic integration of instinct-grounded choreographies and mesmerizing environments; their performances juxtaposes sound, video, light, and movement to create multi-sensorial experiences of wild physicality and contemplative silence. In keeping with LEIMAY’s aesthetics and values, Ms. Garnica and Mr. Moriya lead a variety of art programs at the CAVE located in Williamsburg, Brooklyn.
Photographer: Piotr Redlinski
.
.
.
.
.
.
.
source: dance-enthusiast

LEIMAY prepares to premiere a new performance , video and electronic music piece “Becoming- Corpus”
at the BAM FISHER, The Dance Enthusiast speaks with Ximena Garnica about her work with Shige Moriya and their art.

Dance Up Close, part of Engaging Dance Audiences, administered by Dance/USA and made possible with generous funding from the Doris Duke Charitable Foundation, is designed to bring online audiences closer to our New York dance community. Through short HD Videos combining rehearsal footage with interviews, audiences are offered an uncommon entry point to the behind the scenes of movement creation. They are able to see dancers and choreographers, intimately, as people they can relate to -not only abstract figures onstage.
.
.
.
.
.
.
.
source: bam

Ximena Garnica was born in Bogota Colombia. She is active as a producer, curator, director, choreographer and installation artist. Garnica was awarded the 2010 Bessie Schonberg Individual Choreographers Residency at the Yard and recognized with the prestigious Van Lier Fellowship for young Hispanic directors in New York. She and LEIMAY have received support from The Urban Artist Initiative (UAI/NYC), Robert Wilsonʼs Watermill Center, The Asian American Arts Alliance, the Japan Foundation, the New Hazlett Theater and the National Museum of Dance. Her work has been presented nationally and internationally in Japan, Spain, France, The Netherlands, Mexico, and Colombia. She is Co-Director of the Brooklyn-based art space CAVE and of The New York Butoh Festival. She teaches at P.H.T.S, New York University, Tisch School of the Arts, Department of Drama and at The Stella Adler Studio of Acting. She served three years on the Junior Advisory Board of Dance NYC. She holds a BA in Theater from the City College of New York and graduated from Akira Kasai Tenshikan Dance Institute in Tokyo. She lives in Brooklyn and leads ongoing training in dance and performance at CAVE.

Shige Moriya was born in Kyoto, Japan. He works as an installation and video artist, curator and director. His work has been presented in Japan, Finland, Vietnam, Germany, and the US. Shige Moriya has been recognized with the Armani Designer Award. He has received fellowships from the Ford Foundation and the Puffin Foundation and residencies from the Watermill Center. Together with Ximena Garnica he is the artistic director of CAVE , The New York Butoh Festival and the SOAK Festival.
.
.
.
.
.
.
.
source: leimay

LEIMAY is the parapluie for Ximena Garnica art works, Shige Moriya art works and the collaboration work between these two artists at the intersection of dance, theater and installation art. Works range from photography, to video art, art installations, dance-theater pieces, inter-disciplinary collaborations and training projects.
LEIMAY is a made-up word based on a Japanese term meaning the moment of change (as in the moment between darkness and the light at dawn; also the time of change between eras.
LEIMAY is a project of the experimental and contemporary art and performance space known as CAVE.
Ximena Garnica (b. 1981) is a Colombian-born interdisciplinary choreographer, director and artist based in New York. She received a B.A. in theater arts with a minor in multimedia studies from the City College of New York. In 2006 she graduated from Akira Kasai’s Tenshikan Dance Institute in Tokyo. Ximena is active as a curator and producer. She has been awarded with the 2010 Bessie Schonberg Individual Choreographers Residency at the Yard and has been recognized with the prestigious Van Lier Fellowship for young Hispanic directors in New York. Her work has been presented nationally and internationally in Japan, Spain, France, The Netherlands, Mexico and Colombia. She is Co Director of the Brooklyn base art space CAVE and of The New York Butoh Festival. Currently she teaches at P.H.T.S, New York University, Tisch School of the Arts, Department of Drama. Other teaching credits included master classes and lectures at Denison University, Skidmore College, DeSales University, Muhlenberg College and the Academia Superior de Artes de Bogota. She is currently on the Junior Advisory Board of Dance NYC. Ximena’s performance explorations have led her to travels in Poland and Denmark. She lives in Brooklyn and leads ongoing training in dance and performance at CAVE.
Shige Moriya is a Japanese born video and installation artist. He studied architecture at Kinki University in Osaka. Moriya has been active as a curator and producer. In 1996 he co-founded CAVE as a space for the development of experimental and interdisciplinary art in Williamsburg, Brooklyn. His solo work has been presented in Japan, Finland, Vietnam, Spain, Germany and the US. Shige received the 2009 Armani Design Award through the Robert Wilson Watermill Center. He has received fellowship and residencies from the Ford Foundation, the Puffing Foundation and the Hanoi Contemporary Art Center.
.
.
.
.
.
.
.
source: here

Meditative stillness and physical extremity converge in a mesmerizing experience constructed by LEIMAY, the duo behind CAVE, The New York Butoh Festival and the upcoming Soak Festival. Floating Point Waves is an environment of strings, water, solo dance, real-time video, and live electronic music that unveils the relationship between the human body and natural elements. Movement, water, and light respond to one another as an organic causal chain unfolds, echoing that of our own natural world. Startling performance and exquisite design reverberate through the space, framing a landscape where beauty coexists with darkness.
.
.
.
.
.
.
.
source: chopo

LEIMAY (CAVE Organization Inc.) develops and tours new and existing individual and collaborative creations by Ximena Garnica and Shige Moriya; stimulates dialogue on contemporary performance and installation art; develops LEIMAY’s Ludus Training; and offers studio, living, and performing space for emerging and established artists; our endeavors take place at our home, CAVE, located in the Williamsburg section of Brooklyn as well as at other venues in New York, the Americas, and beyond. Under the name of LEIMAY, the artistic duo of Ximena Garnica and Shige Moriya create individual and collaborative works ranging from sculptural, video, and light installations to photography, training projects and contemporary performances. We are based in Brooklyn, New York at our home, CAVE, where we develop and share our work. We also show our work at larger theaters, visual art galleries, museums and public places in New York and the United States (BAM Fisher, HERE, Joyce SoHo, Japan Society, The Lab Gallery, The Watermill Center, The Asian Museum of San Francisco, The Carnegie Mellon University, The National Museum of Dance, The New Hazlett Theater) as well as international.

Japanese-born artist Shige Moriya and Colombian-born artist Ximena Garnica began working together in 2000 in New York City. The entity LEIMAY (CAVE Organization, Inc.) gradually emerged 1996-2005 from the independent creative work and activities of Shige Moriya (from 1996-2000), and Ximena Garnica, Juan Merchan and Zachary Model (from 2000-2005) at the space known as CAVE. LEIMAY progressively took its name 2003-2010. The word LEIMAY is a Japanese term symbolizing a moment of change, as in the moment between darkness and the light of dawn, or the transition from one era to the other. All 1996-2010 independent productions, works, programs and activities guided by Shige Moriya and/or Ximena Garnica are retroactively attributed to LEIMAY. Since the year 2000, all LEIMAY programs have been lead collectively by Ximena Garnica and Shige Moriya supported by many volunteers, friends and associates, and today CAVE continues to be their home in Williamsburg, Brooklyn.

The work of LEIMAY’s artistic duo ranges from sculptural, video, and light installations to photography, training projects and contemporary performances. Their work is constantly evolving as Shige and Ximena develop individually and as their collaborations with each other and with other artists expand. As of 2012, together and individually they have created 11 performances for the stage (Becoming Series (2009-2013), A Timeless Kaidan (2007), Furnance (2009) among others); 4 installation performances for the gallery (including Uncovering 2011), 6 series of installations (such as Qualia Series 2009-2013); 6 series of photographs (including Cosmos 2004), 2 series of drawings and 10 series of video installations. Ensemble performance members change from project to project. However, many of their collaborators return to work with LEIMAY on new projects; some collaborating with them for as long as sixteen years.

Ximena and Shige believe work and life are art forms of time: ephemeral, present, historical, immaterial, fluctuating, yet fundamentally interlaced. LEIMAY often questions the ambivalence of human nature through its themes, and it seeks transformation as an aesthetic. A key element of LEIMAY’s work has become transformation of specific spaces. In this way, the space – at times a body, environment or object – and the body –at times dancer, actor, performer or object – are fundamental to LEIMAY’s work.

Located in Brooklyn, CAVE is LEIMAY’s permanent home, studio, and performance and exhibition venue for the development of all of LEIMAY’s artistic work and programs. CAVE was occupied and named by Shige Moriya and painters Naoki Iwakawa and Grande in 1996. The building was an abandoned car repair garage when Williamsburg was still an industrial warehouse district, just beginning to be reinhabited by artists, Latinos and other minorities. From 1997 to 2012, CAVE also served as the residence of the feline duo of Franny (1997-2011) and Zooey (1997-2012), these two lovely creatures had affable personalities, were acute critics proficient in all contemporary art forms, and are tremendously missed since their passing.

At CAVE, LEIMAY has organized and run diverse programs. A pioneer ten-year exhibition series (1996-2006) established our home as one of the first experimental public spaces to emerge in Williamsburg alongside galleries Momenta (1995) and Pierogi (1994). Through this series at CAVE, LEIMAY featured seventy art shows featuring 300 artists (1996-2006). Over the years, training and presenting projects have included: fifty butoh workshops over a seven year period attended by 800 dancers (2001-2007), four editions of the NY Butoh Festival featuring 100 international artists in sold-out events attended by 8,000 people (2003-2009), a Vietnamese Artist in Residency program supported by the Ford Foundation (2004-2005), and the NY Butoh Kan Training Initiative which later became the NY Butoh Kan Teaching Residency (2008-2011) which lead to the establishment of the current LEIMAY Ludus Training educational program (2012-present) counting with the participation of over forty butoh teachers leading over one hundred workshops. As a living and working space, LEIMAY has offered studio and housing residencies for over 46 artists from 22 countries (1996-present). The LEIMAY artistic duo continues to live at CAVE and develop its creative vision and aesthetic, fermenting their work alongside artists across generations and disciplines.