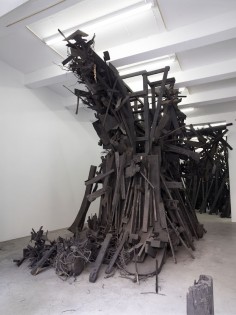 American, born 1961, lives in New York City
Leonardo Drew was born in Tallahassee, Florida, and moved to Bridgeport, Connecticut, when he was six years old. He began making art at a very young age, and pursued formal art training at Parsons School of Design, New York (1981–1982), and The Cooper Union for the Advancement of Science and Art (BFA, 1985). Drew is best known for his abstract, monumental sculptural assemblages. His works are never titled because the artist does not want to impose an interpretation on the viewer; instead they are assigned numbers. Drew has had many one-person exhibitions in national and international museums, including the Royal Hibernian Academy in Dublin, Ireland (2001), the Hirshhorn Museum and Sculpture Garden in Washington, DC (2000), and The Bronx Museum of the Arts in Bronx, New York (2000).
.
.
.
.
.
.
.
source: artnet

Texas- and New York-based artist Leonardo Drew (b. 1961) has always had a thing about materials, the rough-hewn kind that are way past human use and that show nature’s own gothic touch — things like rusted metal, blackened paper and wood, and the kind of general trash and detritus you might have out back in the shed. Many of his early sculptures are made with cotton, a loaded signifier in the hands of a black artist, making Drew one of several contemporary artists who, following Peter Halley, were putting sociopolitical inflections into the familiar language of formalist abstraction.
In the 1990s Drew and his art received considerable attention, not least via essays by writers such as Thomas McEvilley and Barry Schwabsky, who promoted and advanced Drew’s work. Their texts and others alluded to Drew’s evocative materials and his use of the grid, drawing comparisons with the art of Eva Hesse, whose short life ended 40 years ago, and of Louise Nevelson, who was born in the 19th century and peaked 50 years back. This is the long way around of saying that Drew’s polite bas-reliefs are anchored in the 1960s, resting on a formalism that came and went decades before him.

But what seemed safe and a tad anachronistic at first now seems prescient: more and more, our “after-modern” sculptors delve into language featured in other decades. Eric Fischl continues the drama of Auguste Rodin with his sculpture group Ten Breaths, for instance, and Charles Ray extends Jean-Antoine Houdon with his Venice-debuted Boy with Frog. Scatter art that was Postminimalist in the ‘70s now reappears rebranded as installation art. This new attitude is a sea-change of intent from Postmodernist irony, wherein past traditions were sampled and pilfered out of context, typically for ridicule. The after-modern by contrast has an admiration for the esthetics that came before it, and so Leonardo Drew’s sensibility seems to have caught up with the present.

For his recent show at Sikkema Jenkins & Co. in Chelsea, Drew produced a stunning body of organic assemblage in the Abstract-Expressionist tradition — suggesting that his sensibility has moved not forward in time from the ‘60s grids in which he was comfortable, but backward into the ‘40s. I spent a wonderful afternoon among these haunting giants, looking for clues of the dozen A-E personalities that Drew inserted briefly here and there.

The massive Number 134, for instance, suggests the dark spirit of Franz Kline, as if one of his jarring paintings had moved into physical space. It is the most gorgeous work in the show and one I could sit beside for years — lucky are those who will. His endless Number 135 bleeds its form along the wall like Paul Jenkins bled his washes, showing that Drew has completely absorbed this tradition and masterfully furthered its spirit.

If Jackson Pollock had thought to drip firewood that he used to heat his Springs house instead of paint he would have produced Drew’s captivating Number 126, which stacks carpentry cut-offs onto its source in gnarly tree roots. Number 130 is colored as if a swipe of paint had been cast onto the wall with a sweep of the artist’s arm, but on closer inspection is a laborious stacking of wood bits (working artists know it takes a lot of time to make something look spontaneous). With Number 136 Drew returns to the grid pattern with the predictable result that it is less engaging than the gestural work he manages in these other pieces.

It is interesting to reconsider certain ideas of modernism sans the bullying adherents who jammed it down the gullets of generations of visual artists and architects. It was the Way, the Truth and the Light, and ridicule was piled on those who deviated from the received truth. But those days are long gone and today modernism reappears like a cantankerous uncle who went missing for 30 years and now unexpectedly drops by the house — one is more curious than guarded and there are great stories to hear about fine art before it became mixed with the wares of F.W. Woolworth.