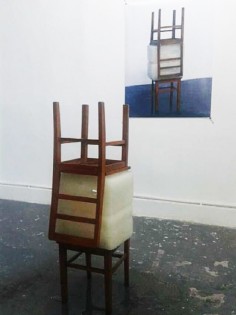 Artist Liao Fei’s practice starts in an experimental way – in the studio. Often immersing himself in a sea of reading, note-making and sketches, Liao tends to work in a clean, simple, mechanical way on the one hand, and on the other occasionally gives himself up to intuition, or throws himself willingly into the banality of daily life.

A number of seemingly unrelated concepts affect Liao Fei’s practice, yet what is evident is that his sensitivity to the everyday, his practice and theoretical argument synthesise in his work, interacting and forming a closed self-sustaining system.

Being suspicious of notions of duality yet simultaneously interested in aesthetics based on the very same duality, Liao has worked since 2011 around ideas of ‘materiality’; from the simulation of material properties to the exploration of scale, field, movement and the system. In Event for example, Liao Fei presents a scene that is obscure and open-ended. A light source follows a path of uniform motion around a large stone and a steel plate; the entire system is immersed in a constant yet rhythmic change of light and shadow, the solid and the immaterial.

In the work titled A Sculpture of the Earth Liao Fei borrows two real-time typhoon monitoring images taken in two hemispheres and draws a cuboid structure connecting them. A Sculpture of the Earth is a kind of double-simplification that appears nevertheless as a concrete image. Liao Fei’s strategy of materialization, simplification and re-presentation gives him, and the viewer, the opportunity to investigate such systems in detail and to start to question what information such over-simplifcation has omitted.

“How is it possible to ‘extend’ a line if it does not have a beginning or an end point?”

In terms of the history of visual culture, and aesthetics, symmetry has been part of human consciousness since the very beginnings of time. As humans we accept symmetry without questioning its origins or why it exists in nature, or for that matter why it is often deemed to be the ‘perfect form’. Yet we continue to struggle to maintain this ‘system’ in some sort of balance. Ironically, the human concept of the ‘straight line’ is not part of the natural world at all – it can only exist in theory in our percieved ‘flat space’. There are no straight lines in nature… and even light bends. The work titled A Straight Line Extended explores these percieved concrete aspects of natural geometry, symmetry and the semantics of description investigating and developing them in a knowingly playful and humorous way.

Liao believes that we are living in a world that is only understood in a teleological way. For example, the human cognitive system – the system that allows us to function in the world – is both imperfect and limited, yet we have no choice but to empoly it. We seldom accept illogical things in our daily lives yet it is the illogical, and its counterpart logic, that form the foundation stones of our cognitive mechanisms.

Replicating this notion of the ‘illogical creating a framework for the logical’ as a system Liao stages and records behaviours that are subtly or explicitly different from those that might be considered the norm when trying to reach an objective, goal, or location. In this way the artist subverts the notion of the teleological.

In the work Crossroads performers traverse the street along paths pre-arranged by the artist. These paths themselves are of no relevance, but they adhere to both pedestrian and traffic regulations. As a counterpoint we see ordinary members of the public crossing the street, in direct violation of traffic rules, after rapid evaluation of their personal safety. It is almost instinctive for humans to find the shortest route. Such routes are teleological – they exist to allow people quite simply ‘to get to the other side of the street’. Liao Fei’s performers get to the other side of the street but that is not their primary objective.

In Signal, Liao again establishes a set of rules – still following the traffic regulations – that keep a cyclist moving continually along city streets. The route depends on the traffic signals: the cyclist going straight on when encountering a green light and turning right when the light is red. Every day for 30 days the artist began from the same intersection, riding for one hour and recording his movement using a smartphone app. Again anti-teleological strategies are employed to questions the rationale for these otherwise everyday human actions and the cognative mechanisms that reinforce and embed them in our lives.

“The experiment is a metaphor of our perception.”

The title of the exhibition “This Sentence is False” comes from ancient Greek philosophy and is known as the ‘Liar Paradox’. Taking the statement at face value it is impossible to determine whether it is true or false. The constant drive to ‘prove the unprovable’ reflects the complicated and fuzzy approach we often have towards the world and underpins all of the work in this exhibtion.
.
.
.
.
.
.
.
source: enpifocn

Liao Fei was born in Jing Dezhen in 1981. He graduated from Shanghai Normal University. He work and live in Shanghai.

Liao Fei’s works mostly originated from the puzzle of surrounding things and himself, hopping that he could be closer to thing-in-itself through his work. Today’s cognitive progress, to a large extent depends on scientific positivism. The mainstream view of external is a material concept established on binary basis. Substance is not dependent on the objective existence of consciousness. This view undoubtedly bears people’s desire to clearly divide things. The science developed under this view features a clear, concise, and mechanical aesthetics.
Liao Fei, on the one hand, has a strong suspicion of dualism; on the other hand, has a strong interest in beauty established on binary basis. This pushes to start his practice since 2011 based on substance itself. And gradually setting his working range according to the scale and systems, which established on binary basis.
.
.
.
.
.
.
.
source: artslant

Liao Fei, an artist renowned for taking a scientific approach to his artistic endeavors, this time it’s sport being put under the microscope. Football, snooker, softball and hockey are all man- made pastimes designed to use the striking of a ball within a designated field of play. Sport, in Liao Fei’s world, can be used as a metaphor for life, in which we are all part of the material in motion on the surface of the planet.