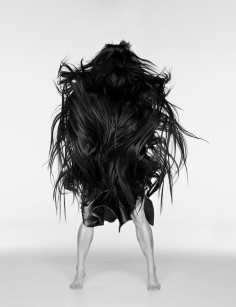 Lilibeth Cuenca Rasmussen (b.1970 in Manila) lives in Copenhagen Denmark. Works primarily with video and performances. With consummate style and an almost voracious curiosity, she navigates the interspaces between different kinds of realities and extremes. Between the perfect staging of music videos and the raw reality of documentaries. Between personal confessionals and political commitment. Taking her own Danish-Filipino background as her point of departure, Lilibeth Cuenca Rasmussen displays a keenly honed sensitivity, almost like that of an anthropologist, to the narratives that exist in and between a place of birth and home country. She gathers, adapts, and universalisms these narratives in her both critical and humorous approach to central issues such as identity, gender, and social relations.Lilibeth Cuenca Rasmussen is a graduate from The Royal Danish Academy of Fine Arts (1996-2002). She has contributed to a wide range of exhibitions in Denmark and abroad. In 2004 she received the Danish Art Council’s three-year grant.

My consiousness about feminism got stronger when I was about 30 years old. At the same time I got a child, and I got out of art school. It actually changed my works in a different direction. Since then they have had more focus on gender issues, and it has been important for me to do works about women. I realized that being a mother and a female hard working artist at the same time wasn’t as easy as being a man. Women simply have to work harder to achieve the same level as their male colleagues. We are raised within a patriarchal society and traditions, so boys and girls are raised differently by their parent(s). It takes time and understanding about that men and women are different, we think and act differently, but this shouldn’t be a barrier to equality. I believe that in order to achieve a dialogue and understanding about feminism and equality, it is important to find a “language” that can be understood by both gender. This is one of my aims in my works. I want to show an image of a strong woman with attitude, and who serves her point of view in a direct way. A woman, who is proud of being a woman. I am not concerned of using my femininity and sensuality in my works. My character is dual and contains male and female values. Feminism is simply a fair play, that concerns both gender. It isn’t about competition, excluding or battling, but something which have advantages for both sex. The feminist from the 60’s have done hard work for us. Unfortunately both men and women today are afraid of the word feminism because of the 60’s. They were men haters and at the same time they tried to be as men. I don’t know if they could have done it differently then? Anyways as a woman today I am greatful for their struggle. But we have unfortunately not achieved equality and I must say that women simply have to work harder to gain the same as men. It is important to continue their work, even though with different means today.
.
.
.
.
.
.
.
source: christianlarsense

AFGHAN HOUND
A girl raised as a boy. A boy trained to act as a girl. A writer and activist in exile. An authoritative male. These are the four characters through whom Lilibeth Cuenca Rasmussen addresses the complexities of gender in cultures where men and women are segregated — and masculinity rules.

Through photographs, sculpture, video, song, costume and performance, Cuenca explores the fragile structure of political hegemony and patriarchal domination. Her premise: When sexuality is repressed, new constructions of gender develop. The title refers both to the long-haired dog breed (the artist uses hair in extreme exaggeration throughout the work) and to Afghanistan (the male-dominated culture from which her characters are drawn).

The Afghan Hound performance includes four impersonations of voices from Afghanistan. The four stories that unfold are recounted through music and song. The choreography is contingent upon a costume made out of hair, metaphorically symbolizing different sexualities that are hidden in the particular context of contemporary Afghan culture.

Cuenca purposely inhabits the role of an impersonator. The artist has stated: “My position as an artist and impersonator is to be a mouthpiece for repressed voices that I find urgent to unveil. The Western discourse on the Arabic World is often reduced to our positioning of them. I have tried to communicate stories seen from their tradition and culture, which in my opinion is important to try to understand, before we interfere or judge.”

Taking her own Danish-Filipino background as a point of departure, Cuenca universalizes cultural narratives in a critical and humorous approach to issues such as identity, religion, gender and social relations.

Lilibeth Cuenca Rasmussen, was born in 1970 in Manila (Philippines) and now lives in Copenhagen (DK). She has graduated from the Royal Danish Academy of Fine Arts. She has participated in numerous exhibitions worldwide, including: Performa 09 (NY, USA), The Thessaloniki Biennial of Contemporary Art (GR), Tate Modern (UK), Brooklyn Museum (NY, USA), Rauma Balticum Biennal (FI), Busan Biennial (South Korea). In 2011, she participated in the exhibition Speech Matters at The Danish Pavilion, for the 54th Venice Biennale (IT). Afghan Hound is Cuenca’s first exhibition at Christian Larsen.
.
.
.
.
.
.
.
source: politikendk