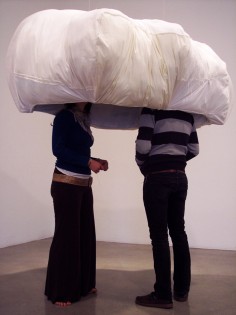 Liz Nurenberg: “Cloud” My Sculptural objects act as experience stations where viewers can form relationships both to the work and to other viewers. Interactivity allows me to explore intimacy, personal space,and how the body physically connects with something while confusing the line between viewers and viewed. The handmade nature of my work evokes intimacy, suggesting the presence of human effort or authorship. Sound acts as an inner voice, which can create a subtle sense of awkwardness. These touches come together to build a scene where interactions happen and narrative forms.
.
.
.
.
.
.
.
source: autonomieprojects

The work of Liz Nurenberg can be characterized as a type of sculpture that is performative, intimate, tactile and even somewhat confrontational. Often constructed from clothing, furniture patterns and a variety of abstract motifs Nurenberg’s pieces invite personal interactions by setting up the conditions for events of mutual reciprocity. Her oeuvre of inhabitable sculptures are often built for two or more people and they tend to position bodies within a shared space of exchange that motives a spectrum of emotions from the romantic to the playful. Not only is her practice as an artist based on creating a different kind of use value for everyday objects but they also work to challenge the politics of participation by upsetting the typical conventions of the audience/performer dichotomy.

Nurenberg often speaks of the ‘life preserving’ function of artistic experience and in her newest works this means engaging with a full range of the senses. Touching and looking are complemented by the activation of individual soundscapes composed of sampled elements from movie soundtracks, ambient noises and even the occasional intervention of Nurenberg’s own voice. These subtle sound collages create an echography of audio tropes that connect with the cultural unconscious as much as the present moment — or really, the moment of being-present. As hybrid cartographies of sound and form Nurenberg’s pieces activate a space of transversal interactivity that puts bodies, perceptivity, listening, and intersubjective relations into a state of mixed constitution that problematizes the role of spectatorship and consumption. In fact, Nurenberg’s sculpture’s are as committed to deconstructing the public/private dyad as they are the reified relation of high and low art.

At a time when metropolitan life is increasing atomized, or even hyper-atomized, Nurenberg’s reconfiguration of the sculptural idiom offers up the hope of finding a common relation, one that is informed as much by the idea of casual connections and affective becomings as it is from the eventual quality of inhabiting shared space. If there is leitmotif that permeates her work it is the cultivation of a kind of delicacy that issues from the beauty of handmade objects and the types of interactions they engender. In a world of hermetic object relations and increasingly hermetic art discourses, Nurenberg’s social sculptures provide us with an opportunity to rethink the politics of embodiement as in-bodied experience. Such an art practice seeks to disrupt the culture of commodification from the inside — providing us with a set of provocations that are both timely and touchable — or what today is only the rarest of experiences.

Bio: Liz Nurenberg is a Los Angeles based artist and a recent graduate of Claremont Graduate University (2010). She was a recent recipient of the Helen B. Dooley Fellowship while at CGU and was also awarded a fellowship student residency at the Ox-bow School of Art in 2002. She has shown in Los Angeles, Michigan and Chicago.
.
.
.
.
.
.
.
source: welcometolaceorg

Liz Nurenberg is a Los Angeles-based artist and a recent graduate of Claremont Graduate University. She is a recent recipient of the Helen B. Dooley Fellowship while at CGU and was also awarded a fellowship student residency at the Ox-bow School of Art in 2002. She has shown in Los Angeles, Chicago, and Michigan. Primarily working in sculpture, Nurenberg’s interactive objects act as experience stations where viewers can form relationships both to the work and to other viewers. In her interactive work, Nurenberg explores ideas of intimacy, personal space, and how the body physically connects with something while confusing the line between viewers and viewed.