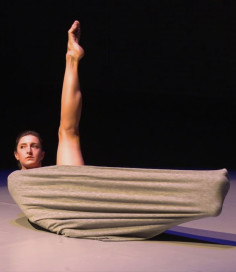 source: danceworkbookpcahus
Pastime takes place in three different spatial locations so that the simple in-place theme with the flexed foot can be presented in three difference situations: vertical, enclosed (in tubular jersey), and upside down.
.
.
.
.
.
.
.
source: lucindachilds
Lucinda Childs began her career at the Judson Dance Theater in 1963 where she choreographed thirteen works and performed in works of Yvonne Rainer, Steve Paxton, and Robert Morris. Since forming her dance company in 1973, she has created over fifty works, both solo and ensemble.

In 1976, she collaborated with Robert Wilson and Philip Glass on the opera Einstein on the Beach, as principal performer and choreographer for which she received a Village Voice Obie award. In the subsequent revival in ’84 Childs choreographed the two “Field Dances” for the opera. Childs has appeared in a number of Wilson’s major productions among them, Marguerite Duras’ Maladie de la Mort, Wilson’s I Was Sitting on my Patio This Guy Appeared I Thought I Was Hallucinating, Heiner Muller’s Quartett, and Wilson and Glass’ opera White Raven and Arvo Part’s Adams Lament. and collaborated with Robert Wilson and Mikhail Baryshnikov on Wilson’s new production Letter to a Man which premiered in Spoleto Italy in 2015.

She received a Guggenheim Fellowship in 1979 for her collaboration, Dance, with music by Philip Glass, and film décor by Sol LeWitt. In a Washington Post review of Dance, Alan M. Kriegsman wrote, “a few times, at most, in the course of a decade a work of art comes along that makes a genuine breakthrough, defining for us new modes of perception and feeling and clearly belonging as much to the future as to the present. Such a work is Dance”.

Since 1981, she has choreographed over thirty works for major ballet companies which include the Paris Opera Ballet, Les Ballets de Monte Carlo, and Baryshnikov’s White Oak Dance Company. She has also worked as choreographer and more recently both choreographer and director for sixteen opera productions including Mozart’s Zaide for La Monnaie in Brussels, Stravinsky’s Le Rossignol et Oedipe, Vivaldi’s Farnace, and Handel’s Alessandro, voted “Opera of the Year” by Mezzo-TV 2013. In 2014 she directed a new production of John Adams Dr. Atomic for the Opera du Rhin and Jean Baptiste Lully’s Atys and Gluck’s Orfeo ed Euridice for Opera Kiel in Germany.

The Summerscape Festival at Bard College commissioned the revival of Dance in 2009, which continues to tour in the United States and Europe and is currently included in the repertory of the Lyons Opera Ballet. Available Light (1983) with music by John Adams and set by architect, Frank Gehry was revived for the 2015-16 season, and she is recently choreographed Beethoven’s Grande Fugue for the Lyons Opera Ballet, which premieres in November, 2016.

Childs received the Bessie Award for Sustained Achievement in 2001, and was elevated from the rank of Officer to Commander in France’s Order of Arts and Letters in 2004, and in 2009 she received the NEA/NEFA American Masterpiece Award.
.
.
.
.
.
.
.
source: nytimes
In her indispensable 1980 study of postmodern dance, “Terpsichore in Sneakers,” Sally Banes wrote that perhaps the most striking thing about Lucinda Childs’s solo works “is her absolutely compelling performance presence.” Well, not much has changed.

In “An Evening With Lucinda Childs,” presented by Danspace Project at St. Mark’s Church on Monday evening, the topic was Ms. Childs’s early works. Now 72, she performed two: the solos “Pastime” and “Screen.” The program — part of Platform 2012: Judson Now, a look at the artistic collective Judson Dance Theater that revolutionized dance in the 1960s — had its fair share of technical difficulties. (The video equipment, for one, was a disaster.) Yet when Ms. Childs was onstage, the mishaps mattered little.

“Pastime,” from 1963, was Ms. Childs’s first Judson Dance Theater work. A solo in three parts — she performed only the middle section on Monday — “Pastime” began with Ms. Childs reclining on the floor wrapped in a piece of blue fabric. As Philip Corner’s score of dripping and gurgling water played, she looked as if she were taking a bath in a shell.

Within this stretchable cocoon Ms. Childs slowly extended her legs so that her back flattened against the floor. Curving her spine upward, she embarked on painstakingly controlled rotations; while her legs emerged from time to time, she transformed her body into an object both whimsical and sculptural. (Later, during a discussion, Ms. Childs said that the solo was not a reaction to Martha Graham’s 1930 “Lamentation.”) The performance lasted only a few minutes, but it was plenty of time to bask in Ms. Childs’s unflappable power.

In “Screen,” from 1965, Ms. Childs magnified a fragment of Seurat’s painting “Le Cirque” by dropping large pieces of colored discs onto the floor. While walking with her back to the audience and holding a small mirror — the way you do when you’re checking the back of your hair — she described the dots in the painting. “I think I wanted to try to find an angle on this material,” she said during the work. “A little bit like a reporter returning to the scene of a crime.”

Over time Ms. Childs’s approach has shifted; while her early pieces relied on dialogue and commonplace objects, she later stripped them of such gimmicks. One fixation remains: the way angles relate to motion. After Judson, she spent several years working alone to explore the potential of natural movement and directional changes. Examples of Ms. Childs’s circular, looping patterns etched with springing steps — they’re mesmerizing — were shown in excerpts from Patrick Bensard’s films “Lucinda Childs” (2006) and “Post Scriptum” (2010).

While the evening proposed only a miniature view of Ms. Childs’s career, its concluding question-and-answer period — even full of awkward pauses — was a treat. Subjects ranged from her recent revivals to the importance of training. “We studied ballet every morning,” she said of her Judson comrades, “and then we’d go and carry mattresses.”

There’s little extraneous about the elegant Ms. Childs; she tells it like it is. When a dancer in the crowd inquired about her performance preparation, she said: “You work and you prepare and it’s a daily process. And then you get nervous. And then you perform.” She couldn’t help smiling. A dancer is a dancer.