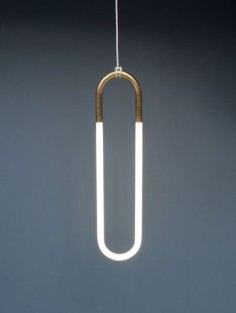 source: lukaspeet
Lukas Peet left his native Canada in 2005 to attend the prestigious industrial design program at the Design Academy Eindhoven in the Netherlands.

After graduating at the top of his class in 2009, Lukas returned to Canada and founded Lukas/Peet Design, which is active in the fields of product design, interior design, graphic design and public space.

His work has been widely published and exhibited internationally. including his first solo exhibition recently at the Design Exchange in Toronto. Lukas received the inaugural RBC Emerging Designer Award in 2014.

In 2013 Lukas co-founded ANDlight is a contemporary lighting company, based in vancouver, british columbia, canada.

The company is co-founded by Caine Heintzman and Matt Davis with the intent to challenge existing standards in lighting.
.
.
.
.
.
.
.
source: trendhunter
The Hanging Light might look like a giant piece of stationary, but if that’s the case, I really didn’t know how elegant and refined a paperclip could look. Until now, that is. A stunning pendant lamp, it is absolutely unique and beautifully simple.

Created by Canadian designer Lukas Peet, the Hanging Light is not only amazing to look at, it also using an energy efficient fluorescent bulb that promotes its eco-friendly status. Interestingly enough, it is actually hanging from its own electric cord, creating a noose-like look.