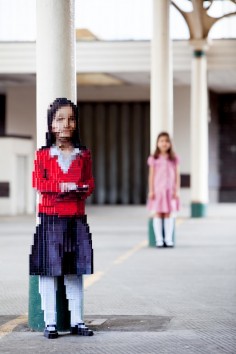 This haunting sculpture of a girl by Luke Jerram is installed at platform one at the Bristol Temple Meads train station. If you were standing a distance away from the sculpture of ‘Maya,’ you’d probably be fooled into thinking she was a lost child. The sculpture of a girl is clutching a phone and looking off into the distance, as if she’s lost or waiting for someone.

Seeing a child completely alone is obviously some cause for concern, but when people at the train station approach ‘Maya,’ they soon realize that she is not real at all.

Jerram create this incredibly life-life sculpture by abstracting an image of his own daughter. The art piece speaks to issues like anonymity and the permanence of images on the Internet. Jerram wonders: “will photos of us remain on the internet forever? Or will they simply get lost and become anonymous in the billions of images we upload each year?”
.
.
.
.
.
.
.
source: watershed

An intriguing experimental sculpture of a young girl standing alone and gazing at her mobile phone was installed on Platform 3 at Bristol’s Temple Meads Station on Thu 25 July.

‘Maya’ is a unique three-dimensional pixelated portrait created by Bristol-based internationally renowned artist, Luke Jerram. From a distance, the sculpture is clear to see but as you move closer, it disconcertingly appears to fragment into cubes.

‘Maya’ is part of the series of Bristol Temple Quarter Commissions, designed to engage people with the new Temple Quarter Enterprise Zone through cultural experiences that aim to surprise, question and delight.

“Every occasion of our lives now seems to be documented with the plethora of cameras we carry around. Billions of images are uploaded onto the internet every year. This sculpture is made of over 5000 photographic sections – pixels from photos of my daughter. From a distance, people coming through the station may be almost concerned to see what looks like a young girl stood by herself, but as they move closer, she will pixelate just like a computer image does.

“There’s a certain distance when standing in front of the sculpture that the pixels disappear and the image of the girl comes together. The sculpture goes ping! It’s really fun. I’m really interested to see whether the public enjoy this optical experience. The idea has been in my sketchbook waiting to be realised for over 10 years. So it’s quite wonderful to finally be able to make this sculpture a reality thanks to Bristol Temple Quarter Commissions!”

To create the artwork, Luke scanned his young daughter using an Xbox Kinect. Her head was scanned at the Machine Vision Laboratory at the University of the West of England. Both scans were combined and pixelated into cubes, known as voxels. The model was then made from precision cut sheets of aluminum. Over 5000 coloured stickers were printed and painstakingly fixed onto the aluminum. Printing was completed at the Centre for Fine Print Research, where Luke is a Senior Research Fellow. Luke will give a talk at Dorkbot to explain the process on Tue 20 Aug at the Pervasive Media Studio.

“At First Great Western we are committed to supporting the communities we serve and are delighted to be able to offer a home to this installation.

“Over 27,000 passengers a day pass through the station, supported by our helpful and friendly staff. It is wonderful to be able to provide a safe and stimulating space for them, as we keep people moving in these increasingly congested times. Luke’s piece adds to Inkie’s stunning piece of street art brightening the Passenger Tunnel.”

“Optically this is interesting because the little squares or pixels have edges which may interfere with recognition mechanisms – especially when seen close up. Squint your eyes or move away and the edges become too small to interfere and Maya pops out. This pixilation was first studied by Harmon and Julesz in 1973 in a picture of Abraham Lincoln”.

“Maya is a truly wonderful creation and we’re absolutely thrilled that Luke – a long-time Watershed collaborator – has created it for us. Since last November, we have seen 22 original art and cultural commissions taking place in the Enterprise Zone, involving 215 artists and reaching an audience of thousands. All of these commissions have helped visitors to the Zone look around and start thinking about their surroundings – turning it from a place to simply travel through to a destination in its own right.”

Also present for the unveiling of the sculpture on Thu 25 July will be Luke’s daughter, Maya, who will be seeing the sculpture for the first time.

‘Maya’ is a Bristol Temple Quarter Commissions, a new collaborative initiative co-ordinated by Watershed with funding from Arts Council England. The objective is to encourage artists and audiences to explore the area now designated as the Enterprise Zone, engaging with its history and its future economic potential as a major location for creative digital industries. The lead producing partners are Watershed, Knowle West Media Centre and MAYK.
.
.
.
.
.
.
.
source: courrierinternational

Maya
A young girl can be seen standing alone at the end of the train station platform. Who’s she with? Is she travelling alone? Engrossed in her own world, she is still and focuses on the phone she carries. As a concerned member of the public approaches, her form appears to digitize and fragment into cubes. Is this some form of reverse augmented reality?

Maya is a sculpture which acts as a three-dimensional pixelated portrait. As with a heavily pixelated two dimensional image made of squares, from a distance the sculptures can be easily read. As the viewer gets closer the object appears to fragment into cubes.

The artwork is installated on platform 1 at Bristol Temple Meads train station.

Context
Every occasion of our lives now seems to be documented with the plethora of cameras we carry around with us. Images are shared and distributed online for our family, friends and the public to see. Unsure of the implications of this life online, will photos of us remain on the internet forever? Or will they simply get lost and become anonymous in the billions of images we upload each year? With the permission of Luke Jerram’s daughter, this portrait raises some of these issues. “From the age of 3 my daughter Maya could use an iPhone. For her the technology was like a pencil, just another everyday tool to be used. Born into this world, for her, the digital revolution and the speed of technological development is not yet apparent.” Luke Jerram

This project has stemmed from Jerram’s ongoing research of visual perception and optical illusions. The fact that he is colourblind has given him a natural interest in exploring “the edges of perception”.

Process
“I had the idea to create pixelated sculptures about 10 years ago. Back then I tried to make the artworks using cubes of painted wood, but the results were disappointing. The opportunity arose this year to make an artwork for Bristol Temple Quarter using more up to date technologies, which a decade ago weren’t financially accessible”.

To make this artwork Maya was scanned using an Xbox kinect. Her head was scanned at the Machine Vision Laboratory (MVL) within the University of West of England. From there the body scan was then pixelated into cubes known as voxels. Then the model was created from precisely (waterjet) cut, sheets of aluminium. Over 5,000 small, 12mm square coloured stickers were then printed and painstakingly fixed onto this aluminium surface.

Printing was completed at the Centre for Fine Print Research (CFPR), University of West of England where Luke Jerram is a Senior Research Fellow.

Public Reaction
During the day, when there are many people around, she can blend into the crowd. At night though, she looks really vunerable, out of place and alone. A train was recently held up when the train driver saw a vunerable young girl standing at the end of the platform. Security were called but the problem was quickly resolved when staff explained that the girl was just a sculpture.

Maya became slightly wobbly, caused by dozens of people hugging the sculpture. The artwork has recently been rebolted to the ground.

Joanna Papageorgiou was one of the first to see the new sculpture after it was revealed – the latest in the Bristol Temple Quarter Commissions.

She said: “I explored Platform 3, all the way from the sign saying Platform 4 to right by Bonaparte’s but failed to spot the 3D sculpture which had been getting so much publicity. I finally asked two members of staff by the ticket barriers and one of the men to pointed to a little girl with a red jumper.

“There was little to distinguish the child from the people surrounding her but as I moved closer I watched the face become distorted and the body become a little boxy.This most amazing creation seems bewildering even up close.The man next to me was filming her from every position and I could see why; she looks different from all angles. It’s a strange sight to see this pixelated creature made from small cubes; as much beguiling as mesmerising. I hated to leave her.”
.
.
.
.
.
.
.
source: art-vibes