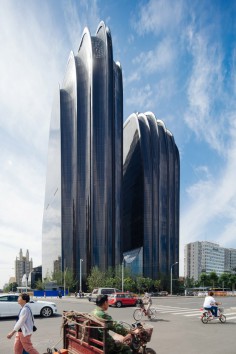 source: youtube
MAD Architects are responsible for designing the Chaoyang Park Plaza, which will be situated in Beijing. Made to resemble mountains, the plaza is supposed to represent an element of nature.

How do you insert a natural element in a crowded, bustling metropolis? That’s a question MAD Architects sought and subsequently found the answer to.

They’re responsible for designing the Chaoyang Park Plaza, which will be situated in Beijing. The idea was to invoke a natural environment to soften the densely built up city.

What sets the plaza apart is the shape. Made to resemble mountains, the plaza is supposed to represent an element of nature.

The mountainous buildings will house commercial, office, and residential spaces. Scheduled to be completed in 2016, the plaza is being built next to one of the city’s biggest parks.

With the park’s water and green space in the background, the surroundings will amplify that natural aspect. Two asymmetrical towers are the focal point of the project.

Connected by a courtyard lobby, the glazed towers have ridges and an imperfect shape, making them resemble mountains. For a source of inspiration, the architects viewed Chinese classical landscape paintings to help them with their designs.

MAD architects released a statement noting “The urban space creates a balance between high urban density and natural landscape. The forms of the buildings echo what is found in natural landscapes, and re-introduces nature to the urban realm.”