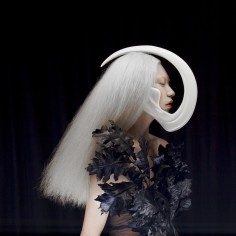 Living in a culture of images, it ironically doesn’t happen very often that we’re visually challenged by something. This is why the Dream Sequence series by Surrealist photographer Madame Peripetie stand out. Confronting the viewer with an uncanny combination of opposites, they seek to uncover a hidden reality. Volt Café had the opportunity to talk to Madame Peripetie about her Dream Sequence book, which will be released later this year. She started off with a quote that perfectly captures the essence of her work: “The image is a pure creation of the mind. It cannot be born from a comparison but from a juxtaposition of two more or less distant realities. The more the relationship between the two juxtaposed realities is distant and true, the stronger the image will be – the greater its emotional power and poetic reality…” (Pierre Reverdy, Nord-Sud, March 1918)
.
.
.
.
.
.
.
.
source: huffingtonpost

Dream Sequence is Sylwana Zybura aka Madame Peripetie’s award-winning photographic book project. It oscillates around the portraiture of unconventional fictional figures seen at the crossroads between fashion, photography, performance and art. The main inspiration has evolved from surrealism and film, while considering the philosophical concept of the beautiful and sublime.

All the protagonists were shot in-camera with minimal retouching involved. As part of this in camera process, body painting, prosthetics, wigs, unusual 3D make-up techniques as well as real flowers were used in order to enhance and distort the bodies of the models. At the moment Madame Peripetie is running a crowd funding campaign on Indiegogo in order to raise funds for printing the striking designed book that is planned to be published in Jan 2014.

The series was initiated in Germany and originally styled and conceptualized as a solo project. I continued the project in London, where I have worked and developed its visual nuances with a regular team who have constituted the core of the project – stylist Stella Gosteva, and make-up artist Marina Keri. The series won The seltmann+söhne Advertising Award in Germany, the Double Gold at PX3 in Paris, and recently received an honorable mention at the International Photography Awards in NY.
.
.
.
.
.
.
.
source: featureshoot

Madame Peripetie aka Sylwana Zybura is a photographer and linguist based in Germany and UK working internationally on diverse art projects and for various independent magazines. She explores the boundaries between fashion, sculpture and the human body, experimenting with various fabrics and patterns; whilst infusing high fashion elements with abstract and conceptual ideas, creating an eccentric escapade of colour and texture. In her work she is focusing on character design and it’s influence on modern fashion photography. Her inspirations include surrealism, dadaism as well as postmodernism (the new wave era of the 80s) and the avant-garde theater of Robert Wilson.
.
.
.
.
.
.
.
.
source: ufunknet