the Point of Perception 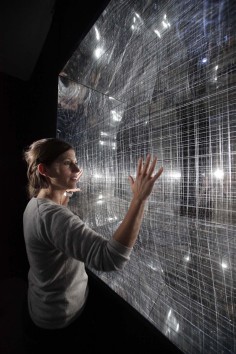 source: madiboyd
Produced in collaboration with neuroscientists at UCL, Beau Lotto and Mark Lythgoe, this work is art and science; we intend it as an experiment in the gallery. It manifests as an immersive environment consisting of a ‘screen’ which is a large gridded space of uncertainty and projected film.The project came about after I undertook a period of research of the human visual system and neuroesthetics and set up a collaboration with Professor Mark Lythgoe and Dr Beau Lotto at UCL. I gained Wellcome Trust and Arts Council funding and led the project culminating in the installation ‘The Point of Perception’ (2009-13), which has since been exhibited at eight public venues in Britain and Europe, including The Science Museum, and will tour the USA and Canada in 2014/15. While resident at the UCL labs, as part of the collaboration, I had regular meetings with the scientists and their teams. During these discussions, the question arose whether there is a tipping point for ambiguity in perception, a critical mass of visual information when form emerges. I felt that this would be the most interesting place for the mind, the point of highest attention and a place it cannot rest as it attempts to resolve the visual information supplied to it. This became the central focus for the installation The Point of Perception.

In 2013, I developed the work for its presentation in Berlin and Dublin through the use of colour and sound. Sound was created specially for the work by composer Nye Parry.

about:
For me, a blank canvas is a pitch dark room into which I sculpt light and space by combining built environments with projected video.

For the past ten years the focus of my work has been integrating projected video into environments that I construct, thereby mixing filmic and sculptural concerns. My work and research places an interrogation of the screen and its interaction with the spectator at its centre. Having initially viewed the screen as sculpture, my more recent research extends its role to become a performer in the film, emphasising the interaction between the moving image and projection surface, so that they play, fight, and sculpt each other.

My work has been shown at among others The Science Museum, London, Art Laboratory, Berlin, The Science Centre, San Diego, The Science Gallery, Dublin, and is currently on display at The Petrosains in Kuala Lumpar.
.
.
.
.
.
.
.
source: artlaboratory-berlinorg
Madi Boyd is a synaesthete from Great Britain, whose artistic work focuses on perception and the brain. In collaboration with neuro-scientists, Dr. Mark Lythgoe and Dr. Beau Lotto, from University College London her work incorporates and combines installation, film and sculpture. Her recent project The Point of Perception explores how much information the human brain needs in order to know what it is looking at. It is an art experience and scientific arena about vision. The installation uses moving image and built environments to confuse depth perception and is designed to act specifically on the human eye and brain to create a space of uncertainty. A newly developed version of the project will be presented at Art Laboratory Berlin with the addition of sound and colour. The idea is to assign musical notes and colours to specific points in the gridded space, in order to explore perception of geometric space and sound.