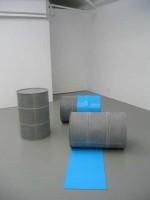 Magali Reus’s work assumes a minimalist form, in which she approaches today’s visual culture from a unique perspective.

The premise for the exhibition ‘ON’ is loosely based on the aesthetics and architecture of transitional spaces. Cargo conveyor belts, airport check in security, road transport, and various vessels become the starting point for sculptures that are paired back to essential forms full of resonance, association and allusion. Reus treats both her film subjects and her sculptures in the same way, without an interest in specific narrative but instead in the dynamic potential of these liminal movements and forms. The video ‘Offshore’ features three young men who are collecting blue barrels floating out at sea, swimming back with them and dragging them onto the beach. It focuses on the men’s bodies struggling against the weight and size of the barrels and the movements and force of the water. The process appears difficult and arduous; the men are depending on their own strength and initiative to fulfill the task, suggesting that the stimulus for doing so comes either from desperate necessity or an urge to kill time. There is a consistency in the use of colour in the film: the blue of the water, the bright blue barrels and the outfits of the men used throughout move the focus from the singular person or object to the sum of all its parts. Within her work Reus often creates a sense of the unfinished or remnant that elevates the potential of the moment before completion. The cast jesmonite boxes resemble the kind encountered in airport security, into which you enter the contents of your pockets before passing through the border. The dynamic form of the ramp creates the suggestion of movement of things. The silicone rubber matt is a reoccurring shape in her work, taking its dimensions from that of a camping mat, another object that suggests displacement, in this instance of a person. Casts of digital cameras appear in ‘Auto-timer’ and ‘Lead’, with their associations of travel and capturing passing moments. In ‘Lead’ the cameras are cut in half, machine-cut in the same way the ‘coins’ are in ‘Pocket Change’ and ‘Pause’, cut from solid metal tubing, and jammed into their sleek aluminium surface. Both the coins and the cameras clearly reveal themselves not to be a facsimile of the original but a sculptural surrogate. These are fossilized, stylized versions of objects from a contemporary moment in time, which will in the future inevitably become redundant. Reus treads evenly between the visual worlds of consumerism and abstraction, distilling both the legacy of mass-production and Minimalism into physical forms that unite the intangibility of the flow of capital, and the omnipresent but overlooked array of objects that help to provide its infrastructure.