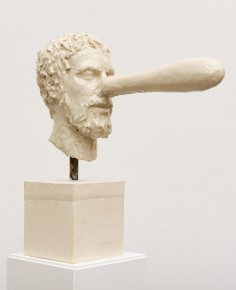 “NICE GESTURES” BY MARISA OLSON
Whether giving away “free ideas” in a city square, buying strangers dinner, or making idiosyncratic marks on canvas, much of Marc Horowitz’s work can be described as “nice gestures.” At times this term may refer to the hilarious social behavior exhibited in projects like “Mr. Nice Guy,” in which he walked around in a blazer embroidered with said phrase offering people mints and helping hands. At other times, Horowitz is gestural in his paintings that land somewhere between storytelling and absurd “what if”- positing.

Horowitz’s projects frequently maintain a night show flavor, while evolving into a Game of Life vibe. The resulting work has parlayed his “nice gestures” into synchronous bodies of painting/sculpture and photography/video work concerned with conjuring novelty items, inventing freakishly whimsical abstract tableaux, and generally adding a meta-layer of absurd observation to everyday practices. All in all, he manages to render seemingly peripheral life activities, like eating or running errands, humorous and beautiful in wholly unexpected ways.

Throwing confetti over a traffic jam of art historical traditions, Horowitz has crafted his own too-big-to-fail genre around the art of conspicuous consumption. Taking the age-old starting point of aesthetics as a sense experience, his work mutates the sensory into an inside joke for the world to share around the concept of “good taste.” Yet the man who could sell anything is more interested in freeness and has become an exhaustive trafficker of vernacular, if at times tacky, products. A fountain of positivity, Horowitz would never say that something is “so bad it’s good.” With him, everything is always celebrated as “so good it’s great!”

Viewers of his work encounter a horizonless display of thrift store finds transformed into dime store monuments, like his recent pelican sculpture decapitated to sport a fish fillet sandwich as a mouth. Subscription magazines are frozen in blocks of ice in his sculptures and office plants get reworked into luscious foreground foliage in his paintings.

The longer we look, the one-liners become deeper worlds. We start to personally share in the consumption of this cornucopia of hokey objects and gestures. All the charisma, all the self-deprecating earnestness seeps in, and we are left oddly sated by the cozy level of human familiarity present in the lines Horowitz draws across artistic traditions and by the rich variety of materials he deploys. This crazy world starts to seem a little more crazy-awesome.

Perhaps this is why Horowitz is prone to lyrical titles, as when he makes a series of photographs of sculptural arrangements in which each is named after an episode of the hit TV series, Friends. His newest paintings are no exception to this rule, if not more noir, taking inspiration from science fiction screenplays. We enter narratives in medias res—as in, “The room is large and humid. A door opens.” Taken out of context, the literary quality registers somewhere on the level of a Choose Your Own Adventure book, but in a sense it is all the prompting we need to see the multilayered cause-and-effect action unfolding across the canvas. Painting, blurring, revision, and more painting accumulate almost like a dream recalled by a man heavily trained in the arts of Photoshop and performance. Either way, one gets the feeling this is just the beginning of something.

Other paintings take more obvious cues from Hollywood. In Silence… Then a powerful low organ. NOTE resounding in the cavernous space. BACK TO SCENE, he creates a work in which a fruit bowl hovers over an unplaceable mise-en-scène. Learning that the piece takes its title from 2001: A Space Odyssey casts the fruit bowl into the position of the monolith that signified moments of cultural shift throughout history in the film. Though static on the canvas, the longer one looks at it, this object symbolically moves from ancient Greece to the type of feminist ‘80s kitchen in which Horowitz grew up.

But then Horowitz is not necessarily a classicist. He is prone to giving us a crazy pop of color, perhaps a construction site hot pink; the red herring that is not a red herring. In the same vein, a painting like “Silence [….]” is undoubtedly tongue-in-cheek. The paintings are funny this way and Horowitz has obviously never shied away from being funny. “Kill the clown, but keep the comedian,” the Letterman-devotee always says. Even as he slip-slides among media, he continues to play out the politically significant role of the jester in these vintage forms.

Of course, his stories are not always suggestive of rom-coms. I am not sure I want to know what happens next when I see a decollated female bust with a pecker-red Pinocchio nose floating in a scatologically dark, murky space, given the trigger-warning of a title, EXT. GARDEN DUSK; CAMERA HOLDS ON WOMAN as four armed POLICE officers approach.But then the greatest thing about jesters is that they are not only fearlessly funny, but they are the only people allowed (ordained!) to get away with criticizing the seat of power without being beheaded. If there is one thing throwing on a jacket emblazoned with the phrase, “Mr. Nice Guy” does, is, it sticks it to the suits.

Among the most powerful things that art can do is teach us empathy for humanity by finding new ways to picture the world, and that is exactly what Marc Horowitz does.
.
.
.
.
.
.
.
source: atcberkeleyedu

Marc Horowitz will discuss how contemporary information technologies, i.e. smart phones, youtube, social media sites, are changing the way we make and consume art and entertainment. Marc Horowitz is an interdisciplinary artist working in performance, video and installation. The central concerns driving most of his work have to do with engaging strangers around absurdist principles in public and on the internet. These projects engage in a dialog with a diverse range of subjects including entertainment, advertising, architectural environments, commerce and the quest for daily meaning. It is Marc’s hope that his work speaks to the moment, that it might reflect and critique American idealism, expansionism, and capitalism; that it might parody pop culture so successfully it becomes re-appropriated by it.”

Marc Horowitz is many things: a virtual cross country explorer, a comedic performance enthusiast, sheep shearer, social experimentalist, one of People Magazines 50 most eligible bachelors, and possibly the first would-be inventor of a brick-house, diesel-truck, hybrid helicopter. One of his recent digital adventures landed him on NPRs Weekend Edition discussing the Los Angeles to Richmond, Virginia road trip he and friend, Peter Baldes, took via Google Maps without ever leaving their homes. Prior to that, Marc was challenged to live 168 hours straight in a Nissan Sentra for the Seven Days in a Sentra national ad campaign. Other projects with Creative Time, where Marc lived his life through the advice of strangers as he surrendered his life choices online for the public to vote on; the Talkshow247 internet broadcast, a 24/7 three-month long lifecast; his involvement with The Center for Improved Living, The Me & You Show at the Hayward Gallery, Marc Horowitz Saves America MTV pilot, and the Human Video Game Experiment.