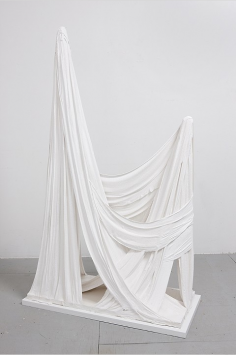 Marc Swanson (American, b.1969) works in diverse media, including sculpture, drawing, collage, photography, video, and installation. The artist employs a refined range of materials, relying on a concentrated vocabulary of wood, glass, textile, naturally-shed animal antlers, and precious metals. He often juxtaposes “high” and “low” materials in the same work: rhinestones, gold and silver chain, and black mirrored panels meet lumberyard two-by-fours and white cotton t-shirts coated in latex. In these juxtapositions, the former adorns the latter in a way that is transformative for both.

The artist grew up the son of an ex-Marine and avid hunter in small-town New England. He then moved to San Francisco in the early 1990s and became involved in the city’s gay counterculture and club scene. He did not feel totally at home in either place, and he began making his first mature work—the crystal-covered deer head sculptures for which he is perhaps best known—as a way to explore, both physically and spiritually, the duality of masculine identities he was experiencing. To this day, this investigation of personal history saturates his work in all media, as does a quiet nostalgia that accompanies such a mining of the artist’s past. As the critic David Velasco writes, “Swanson is an automythologist, one who excels at crafting sparkling, enigmatic totems from the messiness of his own history.” The artist has also been called an alchemist, recasting the aesthetic and cultural connotations of his materials through a visceral, highly personal narrative.

Swanson received his MFA from the Milton Avery Graduate School at Bard College, Annandale-on-Hudson, New York, and also studied at Skowhegan School of Painting and Sculpture in Skowhegan, Maine. Swanson’s work has been the subject of solo exhibitions at the Herbert F. Johnson Museum, at Cornell University, in Ithaca, New York, and the Saint Louis Art Museum, and in 2011 he also had a solo show at the Contemporary Arts Museum Houston. He was commissioned to make the 2009 Peter Norton Family Christmas Project, and in the fall of 2010 he completed a large-scale outdoor sculptural commission for the Kemper Museum of Contemporary Art, in Kansas City. He lives and works in Brooklyn.
.
.
.
.
.
.
.
source: saatchigallery

Approaching his practice as a means of self-exploration, Marc Swanson’s work examines the notion of masculine identity through a variety of media ranging from film, to sculpture, installation, and painting. Reconciling queer sensibility with the ultra conservatism of rural folk arts, Swanson’s Psychic Studies approaches themes of power, spirituality and tradition through an aesthetic of heightened sensuality. Psychic Studies takes the form of a large reflective wall mount; its radial motif suggestive of a web, shield, mystical symbol, or hunting lodge fixture. Constructed from painted wood and mirrored acrylic, Swanson’s form exudes the timeless potency of artefact and the illicit allure of kitsch.
.
.
.
.
.
.
.
source: museumcornelledu

Borrowed from a 1970 rock song by the British band Hawkwind, the exhibition title not only refers to music as one of the ongoing influences in Swanson’s work but also evokes the time of day, when the brightly defined shapes of day give way to the hazy outlines of twilight. Something between human and animal, the creature of Swanson’s installation Killing Moon (Self-Portrait as a Yeti) exists in this indeterminate space. The sculpture started out as an investigation into how natural history museums misrepresent the nature of animals by projecting human characteristics onto them. Casting his own hands, feet, and face for the figure, Swanson realized that “he was the Yeti and the Yeti was him.” In the gallery installation, the self-portrait is paired with a set of rhinestone-encrusted antlers, which have become signature pieces for the artist. Three black portals on the walls of the gallery simultaneously allude to a darker side of life and a formal abstract aesthetic that, like in the rest of Swanson’s work, according to Bill Arning, curator at the MIT List Visual Arts Center, “perfectly rhyme content with form.”

The other major piece in the exhibition is the mixed media installation, Always and Nothing. Consisting of trees and tree branches, antlers, birdcages, a painted taxidermied peacock, and other handmade and found objects, Swanson’s immersive environment contains many layers of meaning. Not only does it refer to the artist’s upbringing in New Hampshire as the son of a hunter and Marine, it also commemorates his experiences as a hardcore punk-rock kid with the hand-sewn felt flags that bear the initials of each stop on his journey. Moved by the sense of mystery and melancholy in Always and Nothing, one critic described it as a “Yeti’s lonely refuge,” making this installation a fitting companion for the Yeti environment in the other gallery.

Also steeped in the history of art with personal heroes such as Joseph Beuys (the “JB” in some of his drawings), Robert Rauschenberg, Joseph Cornell, and Bruce Conner, Swanson’s attention to materials and their combination point to a sensibility that is shaped by dualities and contradictory influences. The glitter-covered deer head is a good example of the artist’s strategy: eye-catching layers of biographical history serve to turn a classic representation of masculinity upside down, as a trophy traditionally connoting male prowess becomes an alluring object in Swanson’s hands. “Antlers are already contradictory,” Arning notes; “they are failures of weapon design: located on the head for greater show than practicality.”

While Swanson’s work draws inspiration from his own biography, he also manages to involve viewers in acts of self-reflection and self-construction that resonate with his way of working. Swanson’s mirror and etched glass pieces—Psychic Studies, Untitled (Antler Box), and Nests—engage viewers’ participation both thematically and formally. As their reflections are bounced back at them, viewers are reminded of the complexities of identity formation. “Through his brave self-revelations,” Arning points out, “Swanson triggers audiences’ sympathetic responses rather than leave them merely in the passive role as witnesses to his terminal uniqueness, thereby inviting and allowing them to better consider their own unlikely path of self-creation.”

While his earlier work openly dealt with “gay culture,” Swanson has stated that he prefers not to be categorized as a gay or straight artist. Instead he has always embraced contradiction in both his work and life. “As an artist willing to revisit identity as an issue a decade after its heyday [in the art world],” Arning argues, “avoiding being any type of poster boy for ‘the good queer role model’ remains a prime concern of out artists in the first decade of the 2000s.”

This exhibition was funded in part by public funds from the New York State Council on the Arts, a state agency. Additional funding provided by a grant from the Cornell Council for the Arts.