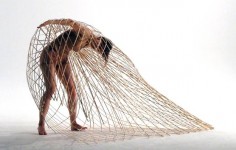 source: mariablaisse
Maria Blaisse (8 May 1944 Amsterdam) graduated at the Gerrit Rietveld Academy Amsterdam 1968. Two years later she was a participant in the design studio of Jack Lenor Larsen New York. After this she did research on traditions of
textile techniques and natural dyeing of fibers in
South America for 2 years.

Her projects can be understood as sculptures or costumes. In many cases, it is difficult to determine which is in control: the body or the form. Perhaps more clearly than any other artist, Blaisse resides firmly between the disciplines of art, design, textiles, and fashion. Her work is an investigation of form and material. The results have found homes in the theater, on the fashion catwalk, and in the art gallery..
.
.
.
.
.
.
.
source: suzannatitewordpress

In Maria Blaisse’s more recent work,‘Moving Meshes’, a series of bamboo structures are worn and manipulated by the wearer; this has been recorded as a studio film as well as captured through photography. As part of my graduating show, I would like to explore the possibility of recording the movement of my garments through film, possibly in an abstracted format.
.
.
.
.
.
.
.
.
source: lieselbonhageblogspot

Maria Blaisse is a desiger who creates from out of the material. The materials lead her to a concept – the round shape of the inside car wheel tire.
.
.
.
.
.
.
.
.
.
.
source: dazeddigital

Dutch designer Maria Blaisse is one of those legends. She began in the early 80s’ by creating spherical foam forms that moulded and folded in ways that were revolutionary at the time and she worked primarily in dance wear where she is still breaking new ground today. Blaisse then went on to collaborate with Issey Miyake for whom she made mitre-like rubber hats.