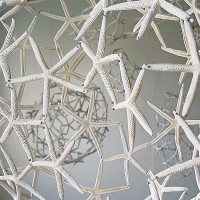 Maria Fernanda Cardoso’s Woven water: submarine landscape 2003 takes up a whole room and makes use of elaborate lighting effects to cast shadows nearly as striking as the poor crucified starfish. Apparently this is meant to show us the frozen and dry nature of these sea creatures hints at their ghostlike and melancholic end.
.
.
.
.
.
.
source: ngagovau

I am interested in chaos and complexity theories, where simple units form complex systems and if you follow those systems it somehow connects us to the universe. In Woven water: submarine landscape I want to create the illusion of the ocean and its currents. The piece is commenting on the environmental impact tourism has on animals and our planet. Although the feeling evoked in a viewer ‘immersed’ in the artwork is peace and tranquillity, the frozen and dry nature of these sea creatures hints at their ghostlike and melancholic end.
.
.
.
.
.
.
source: abcnetau

Cardoso graduated from Yale University School of Art with a masters degree in sculpture and installation in 1990. Her early work referenced ideas of life and death through the use of plant and animal materials to create sculptures, installations and compositions. Her early works included large volumes of water suspended in architectural spaces; seeds germinated into text pieces; sculptures constructed from layers of dead flies; interlocked amphibian carcasses; and striking compositions arranged from butterfly wings. A cursory observation suggests she was referencing the specimen cases and science experiments that inspired her to become an artist in the first place. Cardoso discovered through the exhibition of her work that her sculptures constructed from plant and animal materials elicited the strongest responses from the public, and also resonated with her. Arguably, the human species is inherently curious about the complex forms present in nature, and Cardoso found herself inspired to push her art practice to another level – the microscopic.

This shift led to the research and development of what was to become both her most peculiar and popular work to date (it was recently acquired by The Tate Modern), the recreation of an authentic 19th century curiosityCardoso Flea Circus. From the outset, creating a flea circus proved to be an extremely ambitious project, ‘It’s one of the hardest thing in life to train fleas, it took six years and it requires a lot of patience, no one knew how to train fleas anymore’ states Cardoso. Part performance, part installation, part video art, Cardoso Flea Circus is an engaging and successful work of art that has toured to festivals and been exhibited in galleries across the world.

While researching fleas Cardoso uncovered a quote about flea penises that led her to investigate a broad range of animal and insect genitalia. This specific quote was the catalyst for her PhD research project The Museum of Copulatory Organs at Sydney College of The Arts and culminated in her 2011 solo exhibition at Melbourne’s Arc One gallery ‘It’s not size that matters, it is shape’.

Any artist dealing wit the subject of male genitalia runs the risk of not being taken seriously, but Cardoso and her partner and long term collaborator Ross Harley understand the humorous aspect to their work. The exhibition’s title references the male obsession with penis size and is intentionally provocative, playful and ultimately true in relation to insects.

The exquisite beauty of her sculptures and prints is evidence that Cardoso wants us to think about the penis not as a taboo subject, but as something to be admired ‘these beautiful shapes changed my perception of the world, it makes you realise there’s a lot of sex going around you and you’re not aware of it’.

Cardoso informs us ‘a lot of animal species are promiscuous, especially insects, and some species often compete with each other and [their penises] include hooks to remove sperm from previous matings’ Her comment, the result of years of research, effortlessly reveals the origins of these complex natural forms. Cardoso’s work focusses our attention on the microscopic tools of evolution.
.
.
.
.
.
source: sicardi

Maria Fernanda Cardoso was born in 1963 in Bogota, Colombia. As a child, she went on nature walks with her father, looking at plants through a magnifying glass, an experience that sparked her curiosity and trained her powers of observation. In the late 1980’s, Cardoso moved to the United States and attended Pratt Institute in Brooklyn, New York. In 1990 she completed her MFA at Yale University. In 1996 she moved to Sydney, Australia. As a result of her self-imposed exile from Colombia to the United States and on to Australia, her work often focuses on the exploration of cultural borders and metaphors, and the autobiography of a person living as an artist and tourist in a foreign land.