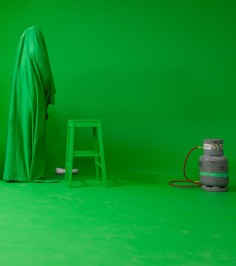 Mark Leckeyis a British artist, working with collage art, music and video. His found art and found footage pieces span several videos, most notably Fiorucci Made Me Hardcore (1999) and Industrial Lights and Magic (2008), for which he won the 2008 Turner Prize.

Through a multi-disciplinary practice that encompasses sculpture, sound, film, and performance, British artist Mark Leckey explores the potential of the human imagination to appropriate and to animate a concept, an object, or an environment. Drawing on his personal experiences as a London-based artist, who spent his formative years in the north of England, Leckey returns frequently to ideas of personal history, desire and transformation in his work.

Leckey was born in Birkenhead, near Liverpool, in 1964. In a 2008 interview in The Guardian, he described how he grew up in a working-class family and became a ‘casual’ in his youth. He left school at 16 with one O Level, in art, and at 19 became obsessed with learning about ancient civilizations. In the Guardian interview he described himself as an autodidact, “That’s why I use bigger words than I should. It’s a classic sign.” Following a conversation with his stepfather he took his A Levels and went to an art college in Newcastle, but didn’t enjoy it: “It was the early 1990s, when critical theory had swept the nation. The place was full of hippies from down south who were reading Mervyn Peake and Tolkien, and suddenly they were made to read Barthes and Derrida. It was like a Maoist year zero. I became very suspicious of the merits of critical theory…”

Mark Leckey’s video work has as its subject the “tawdry but somehow romantic elegance of certain aspects of British culture.”He likes the idea of letting “culture use you as an instrument.” but adds that the pretentiousness that artists sometimes fall into is destructive to the artistic process: “What gets in the way is being too clever, or worrying about how something is going to function, or where it’s going to be. When you start thinking of something as art, you’re fucked: you’re never going to advance.” Matthew Higgs has described his work as “possess[ing] a strange nonartlike quality, operating, as it does, on the knife’s edge where art and life meet”.
.
.
.
.
.
.
.
source: serpentinegalleriesorg

Mark Leckey, born 1964, was awarded the Turner Prize in 2008. His work has been widely exhibited internationally, including solo exhibitions at Kölnischer Kunstverein, Cologne, in 2008 and at Le Consortium, Dijon, in 2007. His performances have recently been presented in New York at the Museum of Modern Art, Abrons Arts Center; at the Institute of Contemporary Arts, London, both in 2009; and at the Solomon R. Guggenheim Museum, New York, in 2008.
.
.
.
.
.
.
.
source: elcultural