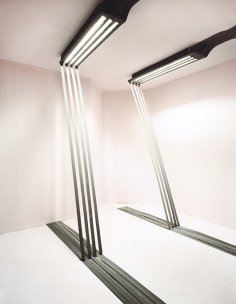 source: marleensleeuwitsnl
Marleen Sleeuwits is particularly interested in the illusory character of depicted spaces. Or to put it more precisely: in and with her work she creates situations in which the viewer is confused by a realistic looking rendering of a space which is in itself entirely artificial. She draws her inspiration from anonymous work and living environments and places through which we move, without any identity of their own, which could be anywhere and nowhere: offices, hotels, airports, etc., where artificial light creates an atmosphere on which time has no hold. In her more recent work Sleeuwits builds new spaces (or sculptures) with materials from such spaces, such as laminate, dropped ceilings, parquet strips and fluorescent tubes, which she then photographs. The antitheses between real and artificial, actual and imitation, concrete and virtual, two- and three-dimensional create a visual experience that momentarily alienates the viewer from a sense of time and place. What am I actually seeing? What is the scale? Where am I? How should I be relating physically to the space that I see in front of me? This last question arises because Sleeuwits plays a game with another space-related aspect of photography, namely the way in which it builds a bridge between (or creates an alternative for) the space depicted and the space in which the viewer is. She creates a disorienting effect by fiddling with our perception of time, place and event, which no longer seem to exist as a unity.
.
.
.
.
.
.
.
source: photogrvphy
Marleen Sleeuwits (23 June, 1980) works and lives in The Hague. Following her study at the Royal Academy of Art, The Hague, she earned her Master’s in Photography at St. Joost, Breda in 2005. She is being represented by Gallery LhGWR in The Hague and by Gallery FeldbuschWiesner in Berlin. Her photo works, objects and installations have been exhibited, among other places, in MKgalerie in Rotterdam; Belfast Photo Festival; the Nederlands Fotomuseum; Nieuwe Vide Haarlem; Brno House of Arts, Czech Republic; Museum de Fundatie in Zwolle; Belo Horizonte International Festival of Photography, Brasil; Museum Het Valkhof; Jeonju Photo Festival in South Korea; and Photo Levallois, Paris.

In 2016 Marleen Sleeuwits launched her first major monography ‘On the Soft Edge of Space’ published by Onomatopee. This 276 pages hardcover book gives an overview on the works she made over the last eight years. The book has become an artwork in itself adding an extra dimension to her oeuvre. Marleen Sleeuwits was elected Foam Talent 2012 (Foam fotografiemuseum Amsterdam) and in 2013, she was a finalist at the prestigious International Festival of Fashion and Photography in Hyères, France. Her work is represented in collections of institutions like the Erasmus University Rotterdam; Museum het Valkhof, KPMG; De Brauw Blackstone and Westbroek; Heden Den Haag; Ministry of Foreign Affairs and various private collections including the Sanders Collection and De Groen Collection.