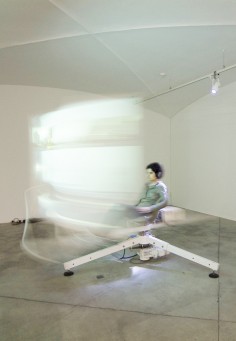 An interactive experience where the physical body and visual perception is subjected to extreme rotational movement.
.
.
.
.
.
.
.
source: vimeo

Marnix de Nijs’ installation examines the precarious balance of machine, image and body in time and the effects that accelerated forces of gravity have on today’s urban citizenry. Participants sit in a racing car seat attached to a motorized revolving arm and focus on a video projection which is simultaneously circulating with them.
.
.
.
.
.
.
.
source: marnixdenijsnl

Marnix de Nijs is a Dutch installation artist. As a pioneer of Dutch media art since the mid-90s, de Nijs makes use of high-concept mechanics, software and ever-evolving technologies to create interactive artworks that play with the viewer’s perception of image, sound and movement.

De Nijs’ work explores how contemporary technological culture acts upon our senses and continuously shapes our modes of perception. Recent installation work focuses on cultural phenomena – and cultural anomalies – induced by rapid technological evolution. Central to his work is the idea that technology acts as a driving force behind cultural change, capable of generating new experiences where societal habits and communication are rethought. His work thrives on the creative possibilities offered by new media, while critically examining their impact on contemporary society and human perception.

To create his technologically complex installation, de Nijs often relies on close collaborations with media labs (such as V2_Lab in Rotterdam, the Netherlands), universities (such as TU Darmstadt, Germany) and highly skilled developers/engineers. His work, in fact, makes use of custom built software and hardware that often adapt existing technological innovations to de Nijs’ specific artistic narratives. Although focused on technology, de Nijs’ background as a sculptor is strongly visible in his work, both in the ambitious physical scale of his works and the craftsmanship he employs to command materials. While a classical sculptural approach may be evident, this is always used to comment on the most contemporary of digital technologies.

Early works such as Spatial Sounds (2000 – 2001, created in collaboration with artist Edwin van der Heide), Run Motherfucker Run (2001 – 2004) and the Beijing Accelerator (2006) comment on the dynamic clashes between the human body and the machine. These works defy the traditional concept of sculpture as a static object and share a fascination with mechanics and speed; echoing Futurist experiments, they investigate the speed-fetishism dominating individuals in contemporary society.

Exploded Views (2008), specifically developed for the city of Florence, emerges from de Nijs’ interest in the way we experience global urban environments. Three participants run on individual conveyor belts. They physically move themselves through an interactive audio-environment and interactive imagery projected at the front of the belts. The movement of the observer’s body sets the 3D images into motion and reveals several cityscapes from all over the world. The city landscapes are scanned with an innovative 3D scanning technology that creates a surreal and dreamlike atmosphere. These 3D scans are meticulously built-up from an enormous pool of photographs, using complex algorithms. Playing with the possibilities offered by the combination of movement and 3D interactive imagery, this installation purposefully places the viewer in a strongly absorptive experience, but what is actually offered contradicts this positioning by mediating a disconnected experience of the city.

In Exploded Views 2.0, which is currently under development, de Nijs further investigates the representation of global urban environments and comments on the prominent role the World Wide Web has assumed in constructing our view of the world and ultimately, on what we perceive as reality. In contrast to the previous version of the installation, the content for 3D city landscapes is provided by users of social media platforms. The work analyzes GPS tags of all the pictures available on photo-sharing community websites (such as Flickr) and reconstructs the top 400 most photographed locations into 3D. The work represents the world according to the way it is photographically represented on the web.

With Exploded Views 2.0 de Nijs remarks on how the ever-growing amount of digital images available on the Internet is rapidly substituting reality as the prime source for shaping our view of the world. Online visual content, shared pictures of city landscapes and events, are simulacra – as defined in Jean Baudrillard’s seminal work Simulation and Simulacra – ‘wherein that which is being simulated is presented and received not as a simulation but as an original. The originals may no longer exist, may never have existed, or their significance has been dwarfed in comparison to the simulacra, which attains a level of primacy and authenticity that traditionally had been the exclusive province of the original’. (Shanken, Edward Art and Electronic Media, London: Phaidon Press, 2009)

Recent works such as the Physiognomic Scrutinizer (2008 – 2009) and its mirror version (Mirror Piece, 2010 – 2011) ironically engage threats of recent developments in surveillance technology that act as omnipotent and pervasive eyes in present-day public spaces. By using biometric algorithms for physiognomic purposes, both installations analyse the facial features of observers and accuse them of inappropriate behaviours simply based on their physical resemblance to famous, controversial characters drawn from a database constructed by de Nijs.

This technology is adopted and further developed in the installation 15 Minutes of Biometric Fame (2011), yet with a thematic shift. The design of the installation 15 Minutes of Biometric Fame is inspired by the camera dollies employed in the television and cinema industries. A camera crane moves autonomously over a large circular track. In a rather intimidating manner, it points the camera at visitors in the exhibition space and scans each visitor’s facial features, comparing them to those of a vast array of preselected persons in a database. The database features “celebrities” harvested from the Internet through online searches performed in the world’s major languages. The comparison process is visualised on an LCD monitor at the back of the camera dolly. The faces of visitors who match preselected persons in the database are displayed on a large public screen and added to the database – elevating ordinary visitors to the status of new-born celebrities.

In the installation 15 Minutes of Biometric Fame, artist Marnix de Nijs ironically deconstructs the processes by which stardom and fame are created by the modern entertainment industry, as well as by ordinary Internet users through various Web 2.0 applications. In our contemporary Internet-driven culture, celebrities include not only glamorous actors and pop singers but also ordinary people who achieve their 15 minutes of fame through participating in reality shows or uploading videos that become YouTube hits. At the same time, this work by de Nijs is further diminishing web database credibility as a source of reliable information through his ambivalent tagging and the feeding back of ordinary faces to the Internet.