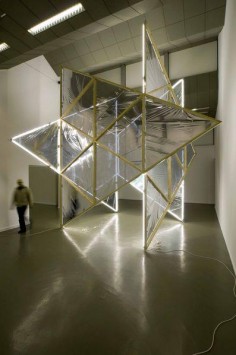 Martin Pfeifle´s works are cuts into space. Although they always relate to their location and are built «in situ», his settings exist nevertheless as self-referential sculptures.

No sooner has this discovery been articulated than the newly-erected or quoted three-dimensionality flattens out into an apparently two-dimensional surface as one walks around it, taking on the appearance of a site-specific painting. Even here, the paintings don´t stop for a breather, but layer themselves sandwich-like in a dialogue with other works by other colleagues and thus become accessible realms of discourse. Having said that, none of the neighbouring works relinquish their identity as a result, but rather the sum of the parts forms something greater, throwing the observer back upon his/her own devices. It is the position that the observers adopt, which permits the substance of Pfeifle´s spatial annexations to emerge and reemerge, at the same time, exemplifying the very impossibility of encompassing it «at one glance», to take it in as a whole. Pfeifle´s settings are glimpsed piece for piece and little by little. From this perspective, the relationship of the section one is viewing to the residual space is always larger than the relationship of the viewed section to the rest of the piece. Spacial dedications eventuate, which then merge the artistic lay-out with the surrounding host space in the sense of a reciprocal dynamization. In this way the observer experiences himself as part of a group of co-observers, but at the same time, is aware of his own unique, personal co-creation of the respective spatial images. This interpenetration of the anonymous observer´s individual space occurs without any didactic or explanatory intention; there isn´t supposed to be any content or message transmitted by the artistic setting.
.
.
.
.
.
.
.
source: artpostblog
Martin Pfeifle (born 1975 Stuttgart) is a German sculptor.
Martin Pfeifle‘s art installation always relate to their environment, the exhibition space itself becomes his art piece while allowing viewers to move around it. During the last couple years, Martin has created some beautiful installations always playing with colors and geometric elements. He creates works of enormous dimensions and almost hypnotic.
.
.
.
.
.
.
.
source: artpostblog
Martin Pfeifle (nato nel 1975 a Stoccarda) è uno scultore tedesco.
Le installazione d’arte di Martin Pfeifle si inseriscono sempre nell’ambiente, lo spazio espositivo entra nell’opera e diventa opera d’arte, consentendo agli spettatori di muoversi intorno ad esso. Nel corso degli ultimi due anni, Martin ha creato delle bellissime installazioni sempre giocate con i colori e gli elementi geometrici. Sono opere di enormi dimensioni e quasi ipnotiche.