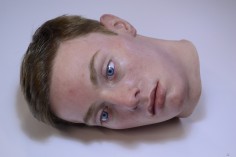 This is test footage and images of the animatronic head built for Edgar Wrights “The World’s End”. This is a fairly simple head with only eye and jaw movement but has just enough functionality to sell the gag! Used during the fight sequence in the toilets.
.
.
.
.
.
.
.
source: pinterest

Waldo Mason “Decapitated Teen “Blank” Head This is the first reveal of the Blanks in THE WORLD’S END after Gary, played by Simon Pegg, gets into a fight with a teenager in the Cross Hands toilet culminating in the teen’s head being knocked off against a urinal! The head was a self contained radio controlled animatronic model, with eye movement & blinks, frown, jaw open & close and slew. The mechanics were built by Gustav Hoegen & supervised and performed by Matt Denton.”