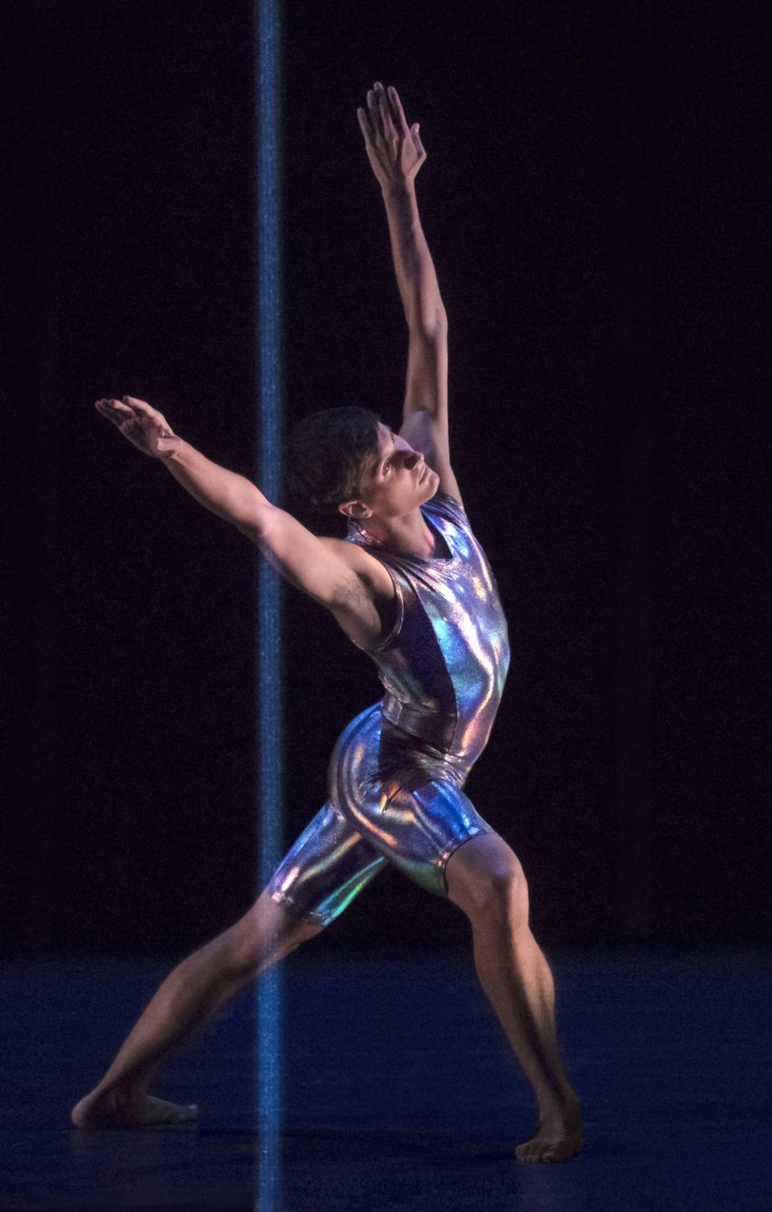 Cunningham has written: “The dance gives me the feeling of switching channels on the TV…the action varies from slow formal sections to rapid broken-up sequences where it is difficult to see all the complexity.” Many people have commented on the elegiac nature of the closing moments of the piece. The décor for BIPED is an exploration of the possibilities of the animation technology of motion capture. The digital artists Paul Kaiser and Shelley Eshkar collaborated with Cunningham, who, working with two dancers, choreographed 70 phrases that were transposed into digital images. These animated images, as well as abstract patterns (vertical and horizontal lines, dots, clusters), are projected on to a scrim at the front of the stage, behind which the live dancers may be seen. Cunningham also used computer software, DanceForms, to develop the choreography for the dance, which is in a number of sections: solos, duets, trios, and ensemble dances. The music by Gavin Bryars, also called Biped, is partly recorded and partly played live on acoustic instruments. Suzanne Gallo’s costumes use a metallic fabric that reflects light. At one point in the dance the men, clothed in pajama-like outfits in a transparent fabric, bring on tops in the same fabric for the women. Aaron Copp devised the lighting, dividing the stage floor into squares lit in what looked like a random sequence, as well as the curtained booths at the back of the stage that permit the dancers to appear and disappear.
.
.
.
.
.
.
.
source: mercecunninghamorg

An active choreographer and mentor to the arts world until his death at the age of 90, Cunningham earned some of the highest honors bestowed in the arts. Among his many awards are the National Medal of Arts (1990) and the MacArthur Fellowship (1985). He also received the Jacob’s Pillow Dance Award in 2009, Japan’s Praemium Imperiale in 2005, the British Laurence Olivier Award in 1985, and was named Officier of the Legion d’Honneur in France in 2004. Cunningham’s life and artistic vision have been the subject of four books and three major exhibitions, and his works have been presented by groups including the Ballet of the Paris Opéra, New York City Ballet, American Ballet Theater, White Oak Dance Project, and London’s Rambert Dance Company. Cunningham passed away in his New York City home on July 26, 2009. Always forward-thinking, Cunningham developed the precedent-setting Legacy Plan prior to his death, to guide his Company and ensure the preservation of his artistic legacy.
.
.
.
.
.
.
.
source: festival-automne

BIPED (1999)
Choreography, Merce Cunningham
Music, Gavin Bryars, BIPED
Décor, Shelley Eshkar, Paul Kaiser
Costumes, Suzanne Gallo
Lighting, Aaron Copp
With 13 dancers
First Performance: Cal Performances’ Zellerbach Hall, University of California, Berkeley, California. 23 April 1999.
The décor for BIPED is an exploration of the possibilities of the new animation technology of motion capture. The movement (but not the physical appearance) of the dancers was transposed into digital images. Paul Kaiser and Shelley Eshkar collaborated with Cunningham to make a new piece of virtual choreography. The dancers involved in the motion capture process were Jarred Phillips, Jeannie Steele, and Robert Swinston.
BIPED was commissioned by the American Dance Festival through the Doris Duke Awards for New Work, The Barbican Centre, London, and Cal Performances, Berkeley, CA.
Major support was provided by the National Endowment for the Arts, the AT&T Foundation, the Andy Warhol Foundation for the Visual Arts, and the National Dance Project of the New England Foundation for the Arts (with funding from the National Endowment for the Arts, the Doris Duke Charitable Foundation, the Andrew W. Mellon Foundation, and Altria Group, Inc.) in partnership with the Walker Art Center.
Gavin Bryars BIPED is used by arrangement with European American Music Distributors LLC, sole U.S. and Canadian agent for Schott Music Limited, London, publisher and copyright owner.