The Last Judgment in Cyberspace
虚拟最后审判 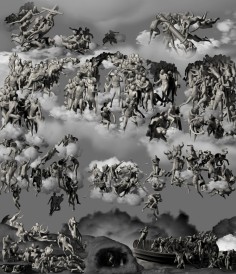 The world of Miao Xiaochun is a virtual one – a world wholly generated on a computer. It confronts the viewer with a smooth, perfect world full of riddles, wonders, secrets, and a coloristic subtlety in every way equal to the persuasive powers of the old masters. Indeed the attraction of his photographic works and 3-D animations is situated in their seeming naturalness that arises due to Miao Xiaochun’s embrace of cultures old and new. As in a crossover, Miao Xiaochun not only relates the ancient, almost-lost China to the Super-modernity of the great metropolises, but he also brings the old European culture in the form of its iconic, canonic works into relation with possible conditions of the present and the future. Past – present – future: in Miao Xiaochun’s photo-projections they become simultaneous, possible configurations and thereby offer the viewer new opportunities to interpret and become absorbed in the narrative and in the future. (Beate Reifenscheid)

“RESTART”, realized between 2008 and 2010, puts forward a series of decisively new approaches. Aspects of the clash of civilizations, the entanglement of our technologies in the forms of our desire, the role of cultural – and intercultural – memory in commerce with our contemporary situation intersect in a medial attentiveness that lays before us the ambivalence, the seduction, and the disquiet in the experience of the virtual 3-D space and the – transbiomorphic – animation in a completely new manner. It is frightfully beautiful, unsettling, and enticing all at once, and it thereby hits a nerve with our contemporary desires and fears(…)The most varied objects of artistic, architectural, and design reference are combined effortlessly in the almost 14-minute 3-D animation. (Ursula Panhans-Bühler)

Miao Xiaochun is renowned for his photographs of contemporary China, vast cityscapes which record technological development, painting an alien view of his homeland and envisioning a new dynastic era.

In his latest body of work, The Last Judgement in Cyberspace, Miao Xiaochun appropriates Michelangelo’s Sistine Chapel fresco as territory for similar provocation. Developed on computer, Miao has built a virtual model of the Apocalypse, architecturally structuring the tiers of Christian afterlife. Replacing each of the 400 figures in Michelangelo’s iconic work with his own image and placing them in corresponding pose and position to the original painting, Miao ‘photographs’ the scene from various vantages, ‘documenting’ the Second Coming from viewpoints both within and outside of the scene.

Printed in black and white. Miao’s photos conceive the celestial as a silvery futuristic tableau that’s enchantingly serene and threateningly industrial. In combining the sublime awe of religious painting with malevolent science fiction theme, Miao uses photography to engage the viewer in an ultra-modern way. In using digital process to create his subject ‘from scratch’, Miao’s photographs authenticate a virtual world rather than document reality. Similar to video game graphics and ‘screen shots’, Miao’s images involve the viewer by casting them as ‘avatars’ within the action. Presenting his scenes at obscure angles, Miao positions the viewer as seraphs, saints, or in the case of The Below View, the damned.
.
.
.
.
.
.
.
source: miaoxiaochun