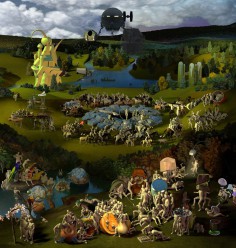 source: saatchigallery
Miao Xiaochun is renowned for his photographs of contemporary China, vast cityscapes which record technological development, painting an alien view of his homeland and envisioning a new dynastic era.
In his latest body of work, The Last Judgement in Cyberspace, Miao Xiaochun appropriates Michelangelo’s Sistine Chapel fresco as territory for similar provocation. Developed on computer, Miao has built a virtual model of the Apocalypse, architecturally structuring the tiers of Christian afterlife. Replacing each of the 400 figures in Michelangelo’s iconic work with his own image and placing them in corresponding pose and position to the original painting, Miao ‘photographs’ the scene from various vantages, ‘documenting’ the Second Coming from viewpoints both within and outside of the scene.
Printed in black and white. Miao’s photos conceive the celestial as a silvery futuristic tableau that’s enchantingly serene and threateningly industrial. In combining the sublime awe of religious painting with malevolent science fiction theme, Miao uses photography to engage the viewer in an ultra-modern way. In using digital process to create his subject ‘from scratch’, Miao’s photographs authenticate a virtual world rather than document reality. Similar to video game graphics and ‘screen shots’, Miao’s images involve the viewer by casting them as ‘avatars’ within the action. Presenting his scenes at obscure angles, Miao positions the viewer as seraphs, saints, or in the case of The Below View, the damned.
.
.
.
.
.
.
.
source: encafa
Miao Xiaochun, born in 1964, now lives in Beijing, and currently works in the photography and digital media studio of Central Academy of Fine Arts as a lecturer. He specializes in the use of digital media and photography creation. His works is combined with three-dimensional computer animation screen shots to show more polybasic visual effects. Miao Xiaochun is considered to be one of the most representative artists in China’s new media art. His recent exhibitions include Record of spirit leaves 2011, Beijing 798 White Box Museum of Art, Miao Xiaochun, 2011, Poland Bialystok Arsenal Museum, Miao Xiaochun – Beijing Hand Scroll and Photography, 2011, Germany Berlin Guardini Foundation Gallery, Macro-Mad, 2010, Germany Koblenz Ludwig Museum, Miao Xiaochun – two great videos, 2010, Beijing Today Art Museum.
.
.
.
.
.
.
.
source: walshgallery

Beijing-based multidisciplinary artist Miao Xiaochun has been relentlessly expanding the boundaries of photography into the realm of new media. His most recent work involves the development of paintings from the canon of Western art history into computer models. These works are expanded from their two-dimensional origins into a rich virtual space complete with enhanced depth and volume. The resulting large-scale photographs retain the semblance of the historical work, but are freed from past temporal associations to become ephemeral and utterly contemporary.

Microcosm, Miao Xiaochun’s fourth solo exhibition at Walsh Gallery runs from May 1 through June 13, 2009. The artist will be present at the opening reception on May 1 from 5 – 8pm.

The large-scale nine-panel installation, Microcosm, is based on Hieronymus Bosch’s 15th century masterpiece, The Garden of Earthly Delights. Microcosm is an imaginative reinvention of the sumptuous landscape of sin, salvation, and tawdry visions of those who never made it to paradise. The structure and narrative pattern of Bosch’s triptych, such as the architecture of heaven, earth and hell, as well as the basic forms of Bosch’s pictures, have been preserved in Miao Xiaochun’s work. But new digital means and computer technologies have allowed Miao Xiaochun to explore a contemporary visual vocabulary. He abolishes the traditional fixed single-point perspective aesthetic, instead favoring the Chinese tradition of multiple points of view in a single landscape. By employing these different views in creating a three-dimensional transposition of The Garden of Earthly Delights, Miao Xiaochun creates a tangled and complex structure with nine panels. The relationship between six side wings and three front panels means the viewer can view hell from heaven, and can also see heaven from hell. The spectator is encouraged to physically move about the work and discover hidden pleasures from new vantage points.

The 21st century visual language and means employed by Miao Xiaochun in Microcosm convey burning issues of the contemporary world: environmental crisis, violence, wars, and the necessity for human cooperation. Without delving into the meanings of a plethora of Bosch’s allegories, Miao Xiaochun constructs a world of radically different metaphors by changing the content, figures, background and facilities. As the artist says, the allegories in Microcosm “reflect modern people’s views on life and death, their desires, and their view on humans’ weaknesses.” They are also embodiments of the artist’s personal feelings and reflections.

Miao Xiaochun (b. 1964) studied at the Central Academy of Fine Arts in Beijing in 1989, before finishing advanced studies in Kassel, Germany. Miao Xiaochun’s works have appeared in landmark exhibitions of contemporary Chinese art: Between Past and Future: New Photography and Video from China, the 2005 Guangzhou Photo International Biennale, the 2008 Busan Biennale, Thermocline of Art – New Asian Waves, and Mahjong: Contemporary Chinese Art from the Sigg Collection.
.
.
.
.
.
.
.
source: sweet-station

Miao Xiaochun: “When compared to the history of life form, the history of art is much too short to be worth mentioning. However, when compared to an individual’s life, art history then seems fairly long. Selecting from the long, as well as short history of art, several water-related artworks that have touched me, I have tried to depict the grand inter-linkages of life played by water through the latest digital technology. The thousands of characters in these works have been replaced by three-dimensional models of my own image created on a computer. This represents a kind of “metabolism” just like the water that is flowing through my body. In this way, I have “flowed” into the art of different lives and different times, and have “generated” new artwork that have flesh and blood relationships with the originals”