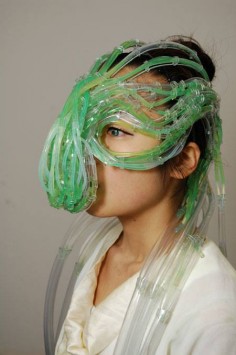 Alternative ways to fuel the body

Algaculture designs a new symbiotic relationship between humans and algae. It proposes a future where humans will be enhanced with algae living inside new bodily organs, allowing us to be semi-photosynthetic. Almost enabling us to become plant-like by gaining food from light. As such, we will be symbionts (meaning that both entities entirely depend on each other for survival), entering into a mutually beneficial relationship with the algae.

Why design new food on what we have now, when we could re-design how we fuel the body altogether?
.
.
.
.
.
.
source: cargocollective

Michiko’s work focuses on critical thinking to question the audience through outcomes that uses art and design research methodology. A key theme that underlies her work is the relationship between nature and humans, often taking extreme vantage on how humans can change their perception to live symbiotically with the nature.
.
.
.
.
.
.
source: abitareit

Will there be a need for urban gardening and farming, if we agree to grow food in laboratories? Should we focus our attention to increasing or altering current food production systems or should we switch gears and focus on how we can alter humans and/or their consumption patterns to diminish the need for food?

Through the works of Christian Jankowski, Arne Hendriks, Michiko Nitta and Michael Burton and John O’Shea, ‘Food Forward’ (opening next Saturday 14th December) zooms in on the individual’s relation to food, focusing on the personal and very intimate relation between the human being and the food that is being put into and digested by the body. However, it also zooms out and considers the position of the human being in a larger ecological context; the relation between humans and their dwellings (cities, for an ever increasing amount of the world population), mediated by food.

The starting point is the video ‘The Hunt’ by Jankowski (DE) that humorously puts the estrangement between city dwellers and food on edge. O’Shea (UK) pushes the limits of the law in his attempts to achieve a more humane meat production and meat consumption scheme. Nitta & Burton (UK) will present two scenarios from their larger study of life after agriculture: the symbiosis between humans and algae and a functional food regime. Hendriks (NL) finally explores the possibilities and consequences of shrinking men to 50 centimeters. Uncomfortable? Alienating? The scenarios start from existing scientific research and new food trends and deserve our attention, because our food future is uncertain.

While some of the future visions presented in Food Forward might seem more realistic or plausible than others, all of them are rooted in today’s scientific research and existing or developing applications. The artists in this exhibition take these scientific as well as societal developments further and present far-reaching visualizations and scenarios for the future. It would be a mistake to think that through their futuristic nature, the works avoid the issue. On the contrary, they propose solutions by redefining the problem.

‘Food Forward’ is curated by the Belgian curator Karen Verschooren. She works as a curator at Z33 in Hasselt (BE) and is the chairman of the assessment committee for audiovisual arts at the Flemish Community. Recent exhibitions of her include ‘Werk Nu’ (2009) and ‘Alter Nature’ (2010- 2011). At the moment she is also working on ‘Mind the System, Find the Gap’ that will open at Z33 in June 2012.
During the opening Foof Forward weekend, on January 15, at 3 pm, she will give a guided tour through the exhibition at Stroom den Haag.
.
.
.
.
.
.
source: treehugger

Imagine being able to eat sunlight, much like plants. British and Japanese artist-designers Michael Burton and Michiko Nitta are proposing just that with their Algaculture Symbiosis Suit, an alternative way to fuel the body which would allow the user to consume nutrients through a photosynthetic process.

The duo describe the concept as being derived from a convergence of science in light of the current realities of a problematic food system:

Algaculture designs a new symbiotic relationship between humans and algae. It proposes a future where humans will be enhanced with algae living inside new bodily organs, allowing us to be semi-photosynthetic. Almost enabling us to become plant-like by gaining food from light. As such, we will be symbionts (meaning that both entities entirely depend on each other for survival), entering into a mutually beneficial relationship with the algae.

Like certain salamanders, which have evolved to be photosynthetic vertebrates, Burton and Nitta imagine a near-future where suits will be used, and a “far future” where human bodies will be enhanced to accommodate new ways of fuelling themselves:

This scenario is, among other sources, inspired by the work of scientists Debora MacKenzie and Michael Le Page who wrote about photosynthetic creatures, or what they call “plantimals” in the New Scientist (2010). [..]

Why design new food on what we have now, when we could re-design how we fuel the body altogether?

Burton and Nitta debuted this intriguing, biotechnological concept last year at London’s Victoria and Albert Museum, where the carbon dioxide breathed by an opera singer is used to feed algae, which can be in turn eaten by humans. The quality of the algae depends on the song of the singer, and it’s a kind of “sonic enhancement of food where different pitches and frequencies make food taste either bitter or sweet.”

Like previous proposals that envision humans wearing toxin-clearing, bio-remediating suits of mushrooms, this is fascinating, futuristic idea. More over at BurtonNitta.