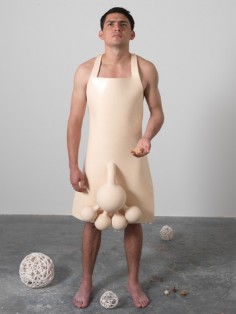 In 2007, Michael graduated from the MA Design Interactions programme at the Royal College of Art. Previous to this, he worked in Contemporary Dance at Laban, conservatoire and studied BA Fine Art Sculpture at Bretton Hall, Leeds University. Michael works on the edge of speculative design, arts, and as a researcher. He creates objects, images and films as insights into richly imagined scenarios exploring the choices we face in our evolution as a species and in redesigning life itself. Michael exhibits and presents internationally, most notably including work shown at the Museum of Modern Art, New York, on tour at various galleries in Australia and the National Taiwan Museum of Fine Art. He leads a collaborative practice, working with organisations and individuals including scientists, performers, choreographers, designers and architects.
.
.
.
.
.
.
.
source: flickr

All chemicals for the origins of life existed on early Earth except a suitable form of phosphorus. Dr Terence Kee (UK) at Leeds University proposes a reactive form arrived in meteorites to kick-start pre-biotic life. Now phosphorus is found everywhere in biology. Astronomical Bodies reverses this process to recover phosphorus from the body, in kidney stones and urine, to grow man-made meteorites. With other life promoting chemicals – the work proposes to send these meteorites into space, to seed life.
.
.
.
.
.
.
.
.
source: newscientist

A man wearing only an apron, from which hangs a bulbous protrusion in the region of his groin, stares into space. This is British artist Michael Burton’s Astronomical Bodies, which will appear in the Symmetries exhibition as part of this year’s Ars Electronica festival.

The artwork aims to explore the possibility of starting life on other planets using phosphorous derived from human bodies – in this case, specifically “the recovery of phosphate from our bodies in urine to create meteorites to distribute biological chemicals to hospitable celestial bodies”.

It fits into the 2011 Ars Electronica theme: “Origin”, in keeping with the research interests of CERN, one of the festival’s partners this year. The collaboration with CERN, which is home to the Large Hadron Collider, is part of the nuclear research organisation’s new cultural initiative to engage with the arts.

The festival, which starts today and runs until 6 September, is a celebration of science, technology, arts and culture. Alongside arts exhibitions, music and theatre, there will be symposia dedicated to exploring everything from quantum physics to cosmology with the likes of CERN director general Rolf-Dieter Heuer and Harvard physicist Lisa Randall.

Astronomical Bodies is based on the research of Dr. Terence Kee of the University of Leeds. He proposes that that a reactive form of phosphorus arrived on the early Earth via meteorite impacts. His research found that phosphorus from space was more suitable for the chemical reactions to develop complex life.

Astronomical Bodies reverses this process and tries to transform phosphorus harvested from the body – in the form of kidney stones and urine – into manmade meteorites. Rather than the traditional idea of transpermia addressed in a host of science fiction writings and films, Astronomical Bodies proposes that the galactic transferal of life-promoting chemicals is a natural process that we can facilitate.