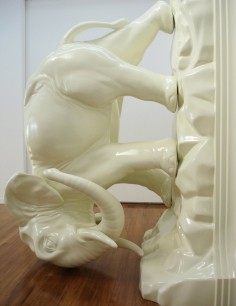 Australian artist Michael Parekowhai combines a fibreglass seal with a handmade replica of Marcel Duchamp’s Roue de bicyclette (1913). Duchamp’s ready-mades, assembled from manufactured objects, are among the most significant 20th-century artworks. In remaking Duchamp’s sculpture, Parekowhai’s contrasts Māori customs valuing skill, adornment and innovation with the emergence of the ready-made in modern art and the devaluing of the handmade. The seal refers to the 19th-century seal hunt by European settlers.
.
.
.
.
.
.
.
source: creativeaucklandacnz

Working across the disciplines of sculpture, installation and photography, Michael Parekowhai’s work plays with perceptions of space, locality, and nationhood. Early in his career he participated in exhibitions – Choice! (1990); Headlands (1992); and Cultural Safety (1995) – now recognised as seminal in the development of contemporary New Zealand art. Along with artists such as Peter Robinson, Jacqueline Fraser, Shane Cotton and Lisa Reihana, Parekowhai’s work in this period expanded the terms of reference for contemporary Māori art.

In 2011 Parekowhai was the sole artist to represent New Zealand at the 54th Venice Biennale, an important event in the international arts calendar. On First Looking into Chapman’s Homer was favourably reviewed in national and international publications, attracting 40,000 visitors. The same year he was named Nga Toa Whakaihuwaka, Māori of the Year for Arts, and awarded the prestigious Premier of Queensland Sculpture Commission.
.
.
.
.
.
.
.
source: theartsconz

Michael Parekowhai was born in Porirua, New Zealand in 1968. Michael is of European and Māori descent. He graduated with a BFA (1990) and MFA (2000) from Auckland University’s Elam School of Fine Arts and holds the position of Associate Professor in Fine Arts at the University of Auckland. His exhibition history spans two decades of practice.

Michael’s narratives can be complex; he draws on an abundant range of both vernacular and collective vocabularies which he re-manufactures into the narrative structures and formal languages of his work. Although key themes of his practice could be described as deliberate takes on notions of introduced species and culture, any potentially overt political dimensions are downplayed. Ideas of camaraderie, tools of teaching and childhood learning, as well as quotes from the canon of modern art history and popular culture openly play out in many of Michael’s stories. While his work is often described as emphasising the extraordinariness of the ordinary, each body of work has layers of potential for meaning and significance – they are open to any depth of interpretation and storytelling.

Michael Parekowhai is one of New Zealand’s most important contemporary practitioners. In addition to an extensive exhibition history, his work is held in all significant public and private collections throughout New Zealand and Australia, as well as major works in permanent collections across the Asia-Pacific region and Europe. Michael Parekowhai has been included in many important exhibitions, including the Asia Pacific Triennial (2006-2007), the Gwangju Biennale (2004); Sydney Biennale (2002), Headlands, MCA, Sydney (1992); and the major art fairs in Basel, Art Basel (2006, 2007) and LISTE (2007). A major volume cataloguing Michael Parekowhai’s practice was recently published by Michael Lett, Auckland (2007). Michael’s work has been reviewed in most major international art periodicals, and covered by every major art periodical in Australasia.

Michael received an Arts Foundation Laureate Award in 2001. He represented New Zealand at the 2011 Venice Biennale with his work On .
First Looking into Chapman’s Homer.
.
.
.
.
.
.
.
source: artecapitalnet