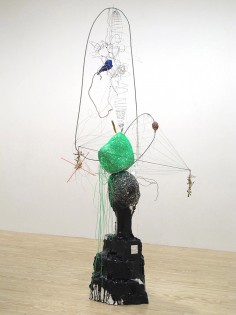 Michelle Segre was born in Tel Aviv, Israel in 1965. She received her BFA in 1987 from Cooper Union School of Art, and currently lives and works in New York City.

Both sculptor and draftsperson, Segre is known for oversized, organic sculptures and crowded linear drawings. She approaches each medium with microscopic attention; her works are highly detailed and finely realized studies of entropic growth and disintegration. In her first print, Swamp Eyes, 2005, Segre used both line etch and spit bite aquatint to create a densely populated garden-like landscape of unfamiliar creatures. Webbed in by linear patterns emulating the organic structure of crystals, the details of the picture ebb and flow with the viewer’s eye, coming into focus and then disappearing again. Camouflaged numbers (birthdates, addresses) and letters are momentarily evident, appearing as hidden clues. The longer one looks, the more one sees, yet an attempt to decipher the composition leads only to further questions regarding subject, scale and surface.
.
.
.
.
.
.
.
source: dailyserving

The constructions of Israeli-born artist Michelle Segre—towering webs of yarn, wire, and organic matter—resemble dispatches from another planet or totems of some long-lost civilization. Unfinished and roughly made, her work still evidences painstaking attention to detail, a ritualistic practice in which all the constituent elements impart shrouded, mystical meaning. A small show of her most recent work, currently on view at Derek Eller Gallery, expands on her long-running obsession with Neolithic idols, craft techniques, and Surrealism. The three monumental pieces included in the exhibit seem to occupy a middle space between the earthly and the otherworldly, the familiar and the unknowable.

Through the glass doors of the gallery—located on an unassuming, industrial block near the West Side Highway—Segre’s mythological assemblages assault visitors with their vivid colors and overblown scale. Segre, who began producing these idiosyncratic sculptures in the 1990s, takes an intuitive, highly personal approach to materials, integrating found objects with papier-mâché constructions, tangles of yarn, and scraps of iron and wire. While her formal vocabulary varies, certain key concepts and motifs make regular appearances: fungi, paganism, comestibles, the cosmos. Themes are meditated upon, picked apart, and then brought back into the fold years later. This constant recycling of both forms and materials lends Segre’s work a sort of cosmic grace, conjuring associations with reincarnation or the first law of thermodynamics: that energy can never be created or destroyed, only changed in form. Her fascination with outer space and repurposing objects recalls Carl Sagan’s avowal that “the Cosmos is all that is or was or ever will be.”
The work that occupies much of Derek Eller’s main room, Self-Reflexive Narcissistic Supernova, resembles an oversized dream catcher, woven through with shards of mirror and coils of wire. This web is linked to an enormous, gorgeously rendered wax mushroom by strands of yarn, from which mushrooms of varying sizes dangle. The giant mushroom is transcendentally beautiful, with a mottled cap reminiscent of a seashell—a blended wash of purples, grays, and browns—and meticulously articulated, layered gills that breathe with life. The strange markings painted on the cap, and the squares of glass affixed to it, make the work seem like a vehicle for some cult-like prehistoric ritual.

Beside it stands an imposing sculpture in shades of blue, supported by metal rods. Again, we see a woven net of yarn with projectiles hanging from it. (On closer look, they’re actually hunks of sandwich bread dyed indigo.) The central cluster below the web is composed of papier-mâché, more old food items, and a piece of masking tape on which fragments of sentences are visible (“Sorry I forgot you” and “You like to take”). Segre skillfully anchors heavy materials with these light, ethereal lattices, creating a tension that lends the finished works their own inner logic and balance.
Though Segre is best known for her monumental sculptures, the highlight of the exhibit is the wall of postcard-sized preparatory sketches, push-pinned against a wall of bright orange paint. As when visiting an artist’s studio, the assembled notes, photographs, and drawings offer a window into Segre’s process and the influences for her elaborate constructions. Sketches of an alien-squid hybrid are sandwiched between a photograph of a dead owl, telephone numbers, shopping lists, and a heavily crosshatched drawing of what looks like a sun exploding. Blues and blacks dominate, the colors of galaxies and unknown things. The everyday is mashed against the unusual and surreal—animal bones next to prismatic nebulae, a game of hangman spelling the word “spaghetti” adjacent to the interior of a petri dish. In such close context, familiar biological forms become odd and unearthly; the mundane becomes alien. This inverted perspective may be the greatest charm of Segre’s work.
.
.
.
.
.
.
.
source: wowaartlinkart