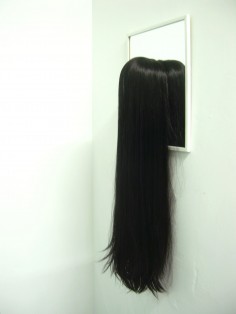 source: miguelivorra
Originally from Spain, Miguel Ivorra studied art in Brighton and now lives, studies and works in London. Miguel creates work that is accessible and high impact. He has produced numerous installation pieces encouraging the audience to get truly involved with the work and have a shared experience. Like the artist himself, Miguel’s work is unashamedly full of warmth. love and humour, but with a measured self-awareness. His highly stylised acrylics explore innocence and temptation. The joyous use of high-precision block colour exaggerates further the flawless skin, the arched brow, the frozen smile, the glazed eyes of his de-contextualised Disney icons. There is a heightened sense of the masked human quality that created the show-piece character, and as such there is feeling of longing. In contrast, his drawings are far more overtly and hedonistically erotic. Sex is explored in all it’s beauty, chaos, its depth and its superficiality, in a monochrome move away from aesthetic perfection.
.
.
.
.
.
.
.
source: encrypt2013
Based on geometry, a line can connect any two different end points. Philosophically, an imaginary line can connect concepts and devices, regardless of time, space and nature of the objects. Miguel Ivorra’s artwork lies under this invisible line influence. Simple and common materials are detached from their conventional role or every day use, and displayed together in an unorthodox way. What it looks like a poetic image is in fact an intense conversation between
the objects, which act like the poles of this imaginary line. As a consequence, their individual significances interact with each other, exploring parallel and new expanding meanings, while energy and tension is created between them. This inner interaction gives an air of independence to the piece; the chemical reaction created between the poles generates thousands of interpretations. That is Miguel Ivorra’s art – involving installations,
photography, media and performance – aims to confront the viewer on that invisible line, and interact through an unconscious and intellectual approach. Last but not least, the artwork concerns marginalized social roles and identities, and involves subjects regarding death, religion and sexuality. Thus, topics are intentionally distorted and polarized through a cynical perception provoked by the world’s prejudice.