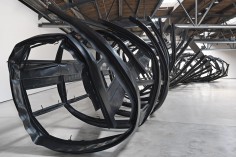 Monika Sosnowska’s “Tower,” a massive steel sculpture that cuts a 110-foot swath across the main gallery of Hauser & Wirth, is a cautionary symbol of the changes occurring in Chelsea. Officially, it’s modeled on the framework Mies van der Rohe used for his famed Lake Shore Drive Apartments, with an eye to the impact of the International Style on Soviet-era architecture in Poland, where Ms. Sosnowska was born. But it’s difficult to look at it without thinking about the luxury condos going up right outside the gallery, along 10th Avenue, or about the way that works of such dehumanizing scale have come to seem banal in this art district.

“Tower” is not a bad contribution to the genre. Its torqued, tunneling frame, which subjects the rigid lines of Mies’s architecture to the sorts of twists and turns associated with Richard Serra or Vladimir Tatlin, compels close observation from multiple vantage points. The view from its open, unraveling ends is especially effective, inducing a kind of vertigo.

Meanwhile, Ms. Sosnowska’s sensitivity to detail — she has included window handles, although no glass is present — ensures that the lyricism of the sculptural form doesn’t entirely distract from the discomfiting spectacle of a fallen residential building.