Do Not Touch
Kilo by Light Light 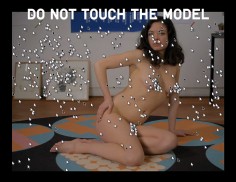 source: studiomoniker
Do Not Touch
Ever-changing interactive music video
visit donottouch.org
Do Not Touch is an interactive, crowd sourced music video for the track Kilo by the band Light Light.
With Do Not Touch we celebrate the 50th anniversary of the computer pointer. For decades this ubiquitous, yet inconspicuous arrow has formed the essential interface connecting user and computer. With the rise of multi-touch interfaces, we are slowly seeing these disconnected phantom limbs disappear. Reason enough to gather our pointers together and have some fun.
The interactive video kicks off with a simple message ➝ ‘Please note ➝ We are recording your pointer’. Viewers answer questions like ‘Where are you from?’ and complete easy tasks like ‘Catch the green dot’ while navigating their enlarged cursors over an old computer screen with large pixels.
In the background, they are accompanied by a sea of arrows belonging to those who participated before them. Some obviously go with the flow, while others diverge from the beaten track. Suddenly the camera zooms out, moving away from the computer screen and recording a space where the band Light Light is playing. Based on items in the space and the activities of the band, amusing tasks and questions keep coming like ‘Form a mask’ or ‘Play the bass’, but ‘Do not touch the model’…
.
.
.
.
.
.
.
source: art21org
Created by the Amsterdam-based design and technology firm Moniker, the crowdsourced music video Do Not Touch (2013) was made to accompany “Kilo,” a song by the European band Light Light. “After 50 years of pointing and clicking,” says the website, “we are celebrating the nearing end of the computer cursor with an ever-changing music video where all our cursors can be seen together for one last time.” Upon clicking the play button, the viewer is presented with a frenetically moving mass of arrow cursors, representing the users who participated in the video’s creation. Text at the top of the screen shows the instructions they received on how to move their cursors, reading for instance, “Catch the Dot” or “Stay in the Green Zone.” When presented with a map, users were given questions like “Where are you from?” and “Where would you like to go?”

The language prompts, which play a huge role in how users interact throughout, are, maybe problematically, only offered in English. The lyrics “fight against the current” suggest that the listener and user too are subjects in a controlled environment. At work here is Moniker’s larger objective to explore our relationship with technology. Do Not Touch serves to comment on how we engage with other users online, and also tells us something about our different ways of following instructions or not. My favorite part of the video instructs the viewer not to touch the nude model. However, a few users were compelled to cover her private parts, or at least point to them. Do Not Touch gives us a glimpse at how people move with or against a crowd. But how much control does the user really have?
.
.
.
.
.
.
.
source: studiomoniker
About the Studio
Moniker is an Amsterdam based interactive design studio founded in 2012 by Luna Maurer, Jonathan Puckey and Roel Wouters.
With Moniker, which means nickname or pseudonym, we work on commissioned design projects while also investing in projects of an autonomous and experimental nature.
The studio works across various media for a diverse range of clients ranging from those in the cultural field to commercial companies. With our projects, we explore the social effects of technology – how we use technology and how it influences our daily lives. Often, we ask the public to take part in the development of our projects. The resulting projects expand and grow like plants, displaying their inner organisational process.
Moniker specializes in interactive, print, video, physical installation and performance work.