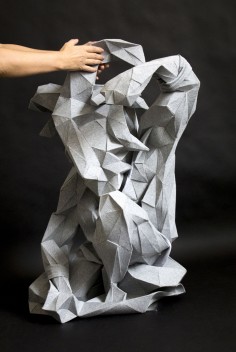 Murat completed his Industrial Design studies at the HfbK Hamburg and the UdK Berlin and during this time he and Hande founded the award-winning product label ‘Mashallah’. Hande studied at the Moscow School of Art and at the University of Marmara in Istanbul. Throughout her studies in experimental fashion design at the UdK Berlin, Hande’s focus was drawn to the philosophical and technical sides of aesthetics. Combining their fields of interest, they decided to explore the possibilities of digital pattern construction in 2008. Rozi, an MBA from the Erasmus University Rotterdam, joined the team a year later to further bridge the polarized fields.

The collective were interested in alternative pattern constructing methods. They experimented with digital tools to modify patterns and use software from other disciplines to create pieces that aesthetically reveal their technological background. Their goal was to interweave these methods and pattern construction so that their work, and their silhouettes, breathes technology in a natural way.

The underlying concept of their work was to express a thought, a moment, a value or a fascination by translating technological evolutions into the aesthetics of a garment, turning them into narrative sculptures. Previously they developed a new digital environment that allows for the reconstruction of clothing from the core up to any degree of complexity. With this approach they established a dimension in which 2D, 3D and the space in between is reconsidered and experimented with. Using the triangular polygon as a basic unit of digital substance and sculptural form, their mission was the digital reconstruction and documentation of the world around us.

Influences in current practice
Our conceptual work has grown in conjunction with the development of our digital environment. Combining CAD/CAM, 3D and animation software in different measures gives us the freedom to scan, sculpt and share objects in continuous new ways. With an eye on the open source culture, we like treating our work as plain digital data that can easily be stored, shared and altered by us and the public and ultimately forms the basis of our digital reconstruction of the world. We’re moving towards the democratization of this data, so that everyone can influence its course.

Working with the V&A collections offered us the opportunity to look at the world’s immense cultural history from a meta-perspective. We were keen on exploring and creating a digital mirror world from a selection of the V&A’s permanent collection.

The main goal was to reshape existing cultural history and insert historic events by 3D scanning objects and figurines and turning them into new pieces. As soon as they become digital files, they were open for experimenting; not only their shape and texture can be recreated but all their attributes can be altered. From here, any ‘what if’ scenario can be implemented and we can theoretically travel back in time to enter new ideas of both the public and our own.

We created an online digital archive of the most inspiring works, which we can freely play with before they’re translated into new paper and sewing patterns. The digital archive will be open to the pubic after, serving as documentation of our collective work.
.
.
.
.
.
.
.
source: creatorsproject
During a six-month Digital Design Residency through the Victoria&Albert Museum and Goethe-Institut London, art and design collective The T/Shirt Issue developed “a taste for staying in the building after dark.”

“The silence and calmness that suddenly take over the Museum once its doors close fed a solemn interplay between the objects and our curiosity,” wrote the collective’s Murat Kocyigit, Hande Akcayli and Rozi Rexhepi in a press release.

Inspired by this sensation, as well as an Edgar Allan Poe’s 1844 poem “Dream-Land” about a voyager ship that lands in a place outside of space and time, the artists created an installation that attempts to mix the physical and abstract. Titled Dream-Land after Poe, the art project includes eight pieces from the Victoria&Albert Museum’s permanent collection that were 3D scanned and digitally sculpted to create four new hybrid creatures made of fabric.

“With ‘Dream-Land’ we have tried to create our own place beyond time and space; a place that blurs the boundaries between digital and physical reality, in which parallel versions of the Museum’s historic objects are free to exist today. The known is replaced with endless narratives that collectively create an unexpected history and unremembered future.”

The artists explain that once digital data is abstracted from an object, its “certainty is removed, leaving it open for alteration and reinterpretation. In a way, it sounds like a digital art interpretation of soul-stealing and perceptions of objecthood that would simultaneously make Poe, Plato, and Plato’s chair proud.

“While slowly shaping up to their final form, each of the creatures develops its own personality, and together they form a scene that’s slightly out of the ordinary.”