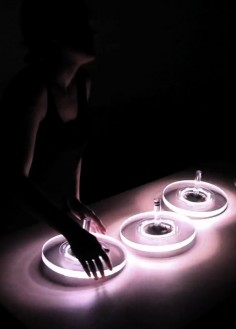 Soft Revolvers is a music performance for 4 spinning tops built with clear acrylic by the artist. Each spinning top, 10’ in diameter, is associated with an ‘instrument’ or part in an electronic music composition. The tops are equipped with gyroscopes and accelerometers that communicate wirelessly with a computer where the motion data collected (speed, unsteadiness at the end of a spin, acceleration spikes in case of collisions) informs musical algorithms designed in Pure Data. LEDs placed inside the tops illuminate the body of the objects in a precise counterpoint to the music. The positioning of the lights creates visually stunning halos around the tops, enhanced by POV effects (persistence of vision). A camera placed above the performance table provides video feed that will be subtly manipulated and projected back on the screen behind the artist, making the projections an integral part of the performance.

With their large circular spinning bodies and their role as music playing devices, the spinning top interfaces strongly evoke turntables and hip hop culture. Some of the mappings between gestures and sound have been borrowed directly from the bimodal behavior of turntables: at slow speed, the sounds produced can remind of scratch solos, with the characteristic unstable pitch variations. At full speed, the spinning tops act like normal turntables playing vinyls, in this case, playing pre-composed material.

As a composer, I’m interested in finding original strategies for musical performance by creating cohesive systems that integrate sound, light and movement. I try to blur the lines between the notions of instrument, interface, installation and performance by proposing new contexts for the musical experience.

In the past few years, I’ve been exploring the sonic potential of everyday or familiar objects. I believe that such objects, in this case spinning tops, engage audience members in a particularly intricate manner, awakening subconscious physical memories of their lived experience with those objects, in terms of behavioral expectations, function and symbolic connotations. The public can anticipate the physical rules that will guide the performance and thus actively participate in the tension and release dynamics at play in Soft Revolvers.

During the performance, I will interpret different ‘tableaux’ using the spinning tops, creating shifting rhythmic soundscapes. The performance takes place on a large table (around 3’x6-7’) and lasts around 20 minutes in duration. The system being a platform for composition, each iteration of this performance is unique, integrating fresh musical ideas.
.
.
.
.
.
.
.
source: musicworksca

In a darkened room, an artist is manipulating four translucent circular objects on a tabletop, moving from one to another. Audience members gather around. The objects emit light. Their spinning motion activates deep tones and beats that crackle and whir, and snippets of voice that drop in and out. The sounds fade as the spinning objects slow down at individual points. As the artist sets each of the objects in motion again, it becomes evident that they are spinning tops. The tops flicker and illuminate the performance space, the music reverberates throughout the room, and the audience is transfixed.

Soft Revolvers is a performance created by sound artist, musician, and composer Myriam Bleau, who espouses a minimalist approach to composing electronic music and is interested in generating a physical response in listeners. “It’s about pure tones [and] perceptual effects, high frequencies, really low frequencies, and extremes, and playing around with your ears. I like giving a really nice experience that’s well composed, well timed.”

Bleau carries elements of hip-hop and pop music into her work. “A lot of people think that experimental music doesn’t have a steady beat. There’s this tradition of classical electroacoustic music that is against having a steady four-four vibe.” Playing with the conventions of popular-music genres, Bleau aims to integrate those elements—“but always with a twist,” she insists. “The beat in Soft Revolvers dissolves and another pattern emerges. The beat goes in and out and leaves you with this tension. Sometimes it creates weird rhythmic soundscapes.”

A multi-instrumentalist from childhood, Bleau plays cello, guitar, and piano. She’s currently working on a master’s degree in composition at the University of Montreal, where sound artist, performer, and composer Nicolas Bernier is her advisor.

The sleekly designed spinning tops in Bleau’s Soft Revolvers are purposely chosen to blur the line between expectations of how electronic music instruments should look and the instruments’ actual appearance. This innovative recontextualization of forms is in the same spirit as instruments created by sound artists such as Bernier, Martin Messier, and—going back a number of years—media art duo [The User]. Bleau’s tops are striking, playful, and luminous. “I want the interaction to be as transparent as possible, but still interesting and rich. If [a top wobbles] and you hear something in the sound that also wobbles, you associate the sound with what you see, but that’s artificial—the tops don’t create any sound themselves. That’s why I’m trying to create a really strong link between what you hear and what you see with the tops.”

Each top is electronically mapped with the sound of an instrument, such as bass, high-hat cymbal, voice, and so on. The actual electronic components include lights, sensors, an x-OSC (wireless input–output board), and a WiFi board with gyroscopes, accelerometers, and magnetometers. “I always use the speed of rotation. If I start one top, it will be at one tempo, and the next one will be at a different tempo, so these tempos can shift in and out of phase, and that creates interesting rhythmic patterns.

“When I see a piece, I like not having to think about how it’s made. and I want to feel like, ‘Wow, this is a great thing happening!’ It’s because of [the] technology, but I don’t really feel the technology. It’s like a new experience. It’s really great to see things that you’ve never seen before. That’s what I want to create. For me, that’s really important.”