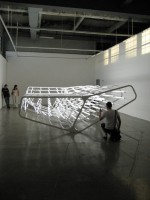 Neil M. Denari Architects is a Los Angeles based office dedicated to exploring the worlds of architecture, design, urbanism, and global cultural phenomenon. We have been working across multiple continents since 1988, designing at all scales for a variety of clients and conditions. We seek out projects that demand new and innovative solutions to the complex issues facing the world today. Whether in a piece of furniture or in an urban design plan, our ambitions always are to materialize these questions in a powerful, evocative, and functional way. The work of the office has become, over the last 15 years, an influential force in the culture of contemporary architecture. Today, we continue to develop through new projects our repertoire of design possibilities. NMDA’s commitment to design innovation and construction excellence has been demonstrated in award winning projects such as l.a. Eyeworks, the Alan-Voo Residence, the Endeavor Talent Agency, our built projects in Japan for the Mitsubishi United Financial Group, and for HL23 in New York, a 14 story residential tower.
–
Long considered to be one of the pioneers of the use of computers in architectural design and visualization, NMDA has produced a body of work that has fused the physical and the graphic worlds in unprecedented ways. From our groundbreaking installation in Tokyo’s Gallery MA in 1996 to our current explorations, we have relentlessly pursued the development of “cultural ergonomics”, i.e. those forms that “fit” our contemporary life. Although NMDA operates on a global level, Los Angeles and it’s landscapes and cultural institutions play an important role in the development of our work. From cinema and television to advanced forms of technological production, Los Angeles provides a rich context from which to draw inspiration.
–
NMDA produces work in the realms of urban design, building design, interiors, landscape design, and graphic design commissions. We often collaborate with innovative consultants, artists, and designers in the development of projects- the list includes artist Mel Chin, 2X4 of New York, FRONT façade consultants of New York, the Brand Architect Group of Tokyo, LA based- artist Jim Isermann, BBM art group of Berlin, and Richard Massey Graphic Design.
–
In the past five years, NMDA has won 2 National AIA Honor awards, 8 LA Chapter AIA Honor awards, and a 2005 Progressive Architecture Award. Our work has been exhibited at the MOCA Los Angeles, San Francisco MOMA, the Mori Museum in Tokyo, MOMA New York, and the 2007 Hong Kong / Shenzen Biennale, and recently, at the Museum of the City of New York and Syracuse University with solo shows on HL23, a 14 story condominium tower in construction next to the High Line. NMDA’s work has been extensively published worldwide with recent covers stories in European and Asian design magazines. In 2008, Neil Denari was included in Taschen’s Encyclopedia of Modern Architecture, a massive two volume compendium of the most important architects from the last 250 years.
–
During the last ten years, NMDA has been on the lists for consideration for many important institutional projects including Temporary MOMA Queens, the Art Gallery at Virginia Commonwealth University, Wadsworth Atheneum, Cincinnati Art Museum, New Museum / New York, Carnegie Science Museum, CCTV Beijing, Seattle Art Museum, Jet Propulsion Laboratory Visitors Center & Administration Building, and Eyebeam Museum of Art & Technology.

NEIL M. DENARI / PRINCIPAL
–
Neil Denari was born in Fort Worth, Texas and studied at the University of Houston (B Arch 1980) and Harvard University (M Arch 1982). After graduate school, Denari worked as a technical intern in Paris (La Courneuve) for Aerospatiale Helicoptres (now Airbus). In 1983, Denari moved to New York where his work explored the technical and formal impact of technology on architecture. While there, he worked as a senior designer at James Stewart Polshek and Partners, exhibited his speculative work at numerous museums and galleries, and in1986, at 29, was the youngest member of 40 Architects under age 40. Also in 1986, the Cooper Hewitt Museum purchased a drawing by Neil Denari, the first of seven major museums to have his work in their collection. The others include the Museum of Modern Art New York, MOMA San Francisco, the Denver Art Museum, the Heinz-Carnegie Collection in Pittsburgh, the FRAC Center in Orleans, France, and the Museum of Modern Art in Sydney, Australia.
–
Neil Denari shifted his practice to Los Angeles in 1988 and began Cor-Tex Architecture, which later became Neil M. Denari Architects (NMDA), Inc. in 1998. In the late 1980’s Denari’s work began to achieve international recognition, most notably through his 3rd place finish in the Tokyo International Forum Competition. This launched his now 22 year association with Japan, a country where he has taught and lectured on a regular basis. While teaching at the Shibaura Institute of Technology in 1990, Denari lived for 8 months in Tokyo. His experiences there, like those of Paris, have been a constant reference on phenomena as diverse as urban morphology and fashion design. His first project built in Japan (1996), the Interrupted Projections exhibition space, has now been followed by a series of bank projects for the Mitsubishi Trust Financial Group and other experience economy projects. With NMDA, Denari has focused on a diverse range of design endeavors that look at manifold issues pertaining to architectural speculation.
–
Since 1986, Denari has had a distinguished career as a teacher. He is a tenured Professor in the Architecture and Urban Design Department at UCLA. He has also taught at Columbia University, the Bartlett, UC Berkeley, Princeton University, and the Harvard GSD.
–
Neil Denari is the author of two bestselling books, Interrupted Projections (TOTO 1996) and Gyroscopic Horizons (Princeton 1999). In 2002, he was given both the Richard Recchia Award and the Samuel F.B. Morse Medal for architecture from the National Academy of Design in New York for distinguished work in the field. In 2008, Denari received an Academy Award from the American Academy of Arts and Letters and in 2009, he received a Fellowship from the United States Artists organization.
–
In 2011, he received the Los Angeles AIA Gold Medal. It is the organization’s highest honor for an individual architect. He is a registered architect in New York and California, a member of the American Institute of Architects, and has given more than 230 lectures around the world on his work.
.
.
.
.
.
.
.
.
source: tropolism

The Flickering Field of Fluoroscape: Illuminated perspectives on Neil Denari. On a culture-filled Sunday this past September 17th I tromped down to Downtown Los Angeles to take in several fantastic “Spectacles of Culture”. First, I visited the Banksy show, which was held in an out-moded industrial structure off of Santa Fe Blvd. in the heart of LA’s industrial district. Banksy, the merry prankster of the street-art world, jammed the warehouse with examples of his work, and an live elephant as well. I shall not comment on the show as it has already been done to death by the press and therefore can be summed up with the phrase “if you were there, you’d know what I’m talking about”.
The event was, however simply the primer for the next stop which was to take place at the Southern California Institute of Architecture (SCI-Arc). Click Continue Reading for the rest of my review and another picture.

As an alumni of SCI-Arc I try and avoid the place as much as possible, and usually need a pretty good reason to go back. For those who managed to visit the Neil Denari “Fluoroscape” show during it’s roughly one month run you would probably agree that it was an excellent reason to drop in on the institution and it’s former director. Congratulations to Neil for coming back to the school who gave him the boot in 2001. As a student who spent time with both Denari and Eric Owen Moss, (Denari’s tyrannical replacement) I have always admired Neil’s clarity and his perceptive observations on contemporary culture.
Fluoroscape is a dramatic piece that functions more in the realm of installation and affect than architecture and effect. Constructed of white metal rib-work and standard T-5 fluorescent lamps (of the same kind, the press-kit notes, as “…every supermarket, school cafeteria, and office space across the global landscape”), this object somehow escapes it’s “objectness” and transcends the boundaries between architecture and installation culture. Situated in SCI-Arc’s small (but tall) “Fish-bowl” gallery, the work is indicative of Denari’s pursuit of the perfect aesthetic which might for a moment come to represent the temporality of the global commercial environment.
Described as a “solid surface object” the entire piece was meant to react to the visitors presence. I’m not sure how successful this might have been as the piece was set to alternate the light fields (three distinct bodies operating separately) via a timer. Certainly had there been more time, the designers at NMDA would’ve developed an electronic system that could’ve have sensed the viewers presence and flickered accordingly. Never-the-less the work is a stunning success and ought to travel and be tested in an assortment of venues. Only then will it’s validity as “space maker” be complete.
This project also represents another theme in Denari’s work: corporate collaboration. Neil is a firm believer in corporate sponsorship (his first installation, Project No. 9601, was sponsored by Sony). Fluoroscape was sponsored by Bartco Lighting of Huntington Beach California and demonstrates that architects and their corporate sponsors and suppliers can go beyond the simple exchange of commerce. What emerges is an art object that flaunts the wares of its sponsor, but keeps true with the architects vision of aesthetics.
Denari was there by the way, grinning broadly, and hawking Fluoroscape posters designed in the French New Wave style. No one showed up, which was a little sad, and possibly and indicator of the SCI-Arc’s waning influence in the city. Denari was positive though, playing the good host, entertained questions aplenty and held court with the few admirers who bothered to drop in for this closing event of his amazing show.
I just wish more had come to see it, because any images presented here will fail to represent this cunning installation, which acts as both architecture and phenomenology, as well as a suggestive jab at the inadequacies of the contemporary built-environment.