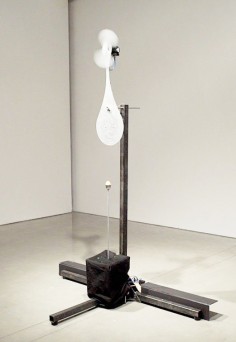 Prolific artist and Make: contributor Neil Mendoza, creator of the Electric Knife Orchestra and that spinny, glowy thing, is back with a real eggsistential question.

“I thought it would be fun to pit a large metal machine against a small fragile object,” says Mendoza. “When people look at the egg darting around on a long stick to avoid the pendulum they seem to see it like a Looney Tunes cartoon with the big lumbering pendulum forever chasing the egg but never quite catching it.”

Mendoza created the piece, Eggsistential Angst, for a group exhibition called Rare Meme. The pendulum is made from CNC’d aluminum, as is the quick-spinning reaction wheel on the end. The pendulum moves freely; all the motion comes from the spinning of the reaction wheel, similar to how satellites change their orientation. The momentum change of the pendulum is driven (inversely) by the momentum change of the spinner, which is in turn driven by an Applied Motion SSM23IP-3EG StepSERVO (a hybrid stepper/servo), which is controlled by an Arduino Due.