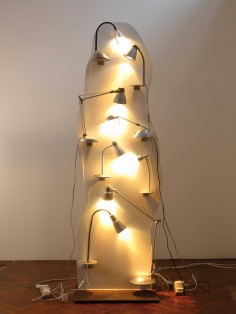 Nicolas Deshayes’ sculptures use materials such as annodised aluminum and vacuum formed plastic to embrace the glossy aesthetics of 21st century design. Despite their emphasis on slick industrial surfaces and physicality, Deshayes’ works maintain a human presence in the form of glutinously rich, bodily allusions, engaging with the materials in ways that distort the ordinary.
.
.
.
.
.
.
.
source: saatchigallery

Nicholas Deshayes finds painterliness in the manmade, and his works hover somewhere between two different kinds of making: the organically gestural and the industrially produced. His works operate in what he calls “the threshold between liquid and solid”, and the contrasts in his work – roiled against levelled surfaces, the heat of production against cool of presentation – are a way of examining the relationship of humanity to the materials with which it surrounds itself. The title of Soho Fats, a series of five white panels mounted on floor-to-ceiling handrails, refers to the congealed human fats found in central London sewers; by using polystyrene, a non-biodegradable plastic familiar from packaging, Deshayes draws parallels between the human subject and its residual traces. Cutting into the surface with a hot wire cutter, Deshayes evokes both the bodily remainder and rippling water of the hidden core of the city. Deshayes’ interest in plastics is a reminder of both their human usage and human associations; their carbonic origins are our own.